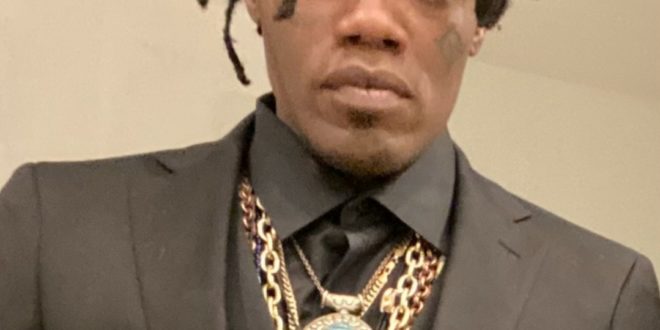 a) The Ga-Dangme Lands Administration Secretariat, under the aegis and authority of the Ga Mantse, shall have the mandate to handle and resolve all land conflicts, disputes and litigations in the Ga-Dangme Traditional Area, in close collaboration with all relevant stakeholders of the Ga-Dangme people,

b) The Secretariat shall concern itself with working with the Ga Mantse and other relevant stakeholders to put in place a purposeful and well-coordinated customary land tenure system and uniform procedures for land acquisition and documentation,

c) Formulate policies and institute mechanisms for effective and efficient revenue generation from leases of Ga-Dangme lands for the cultural, social and economic development of the Ga-Dangme people and their land, to complement central government’s developmental agenda,

d) To confirm by endorsement all lands given out to leaseholders to avoid future land litigations. The Lands Commission shall therefore not register any land within the Ga- Dangme Traditional Area unless the land documents have been properly processed, approved and certified by the GDLA,

f) To help prevent uncontrolled development of lands in the Greater Accra Region,

g) To exist and function within the framework of the laws of Ghana, and ensure compliance with state policies and directives,

h) Address the issue of Land Banking to agree with relevant governmental agencies to reserve some plots of land for use for public good,

i) To coordinate its activities with other government agencies and stakeholders, such as the Ministry of Lands & Natural Resources, Lands Commission, Town & Country Planning, Accra Metropolitan Assembly, etc., in order to achieve the above objectives,

j) Perform other functions as shall become necessary in the future and approved by the Board.

Nii Adama Djata also known as Laremy Wade, Born in Boynton Beach, Florida. April 21st, 1981. Moved to Georgia in 1996, Graduated in 1999 from highschool. Military career from 1999-2003. Graduated Online Business School in Ga. 2003-2007. Spiritual priest from 1996 to present. Computer money magic started in 2011. True Movement Association spiritual organization started in 2002. First crypto was made in Feb. 2014 on black history month and I was the first melanated person to make a crypto. 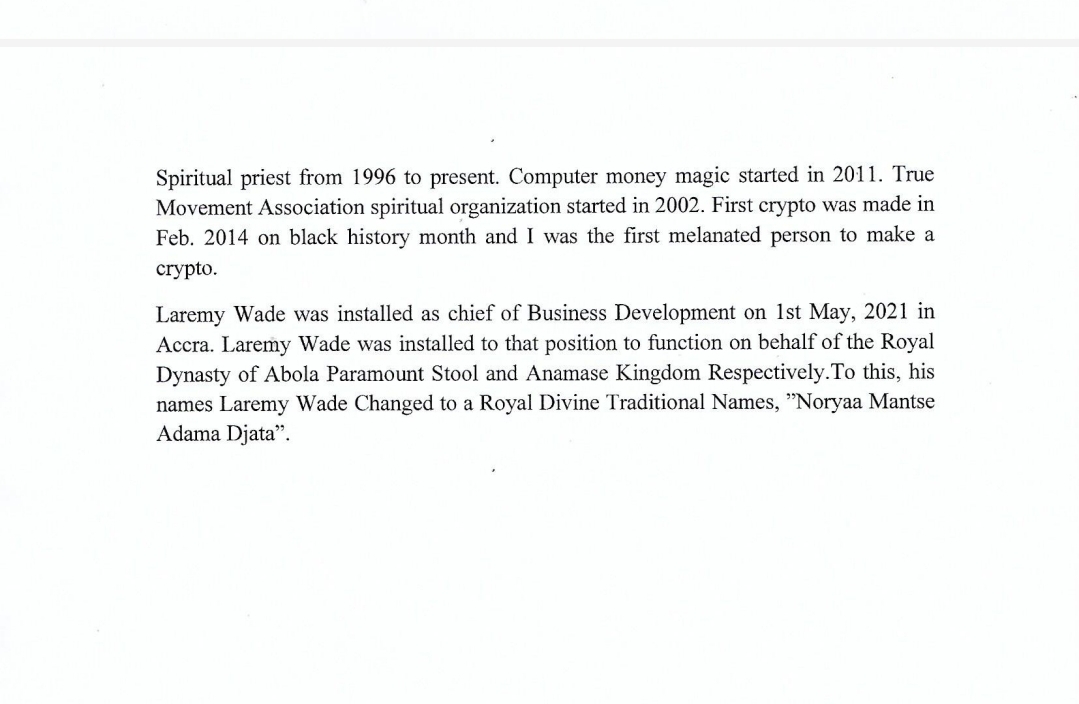 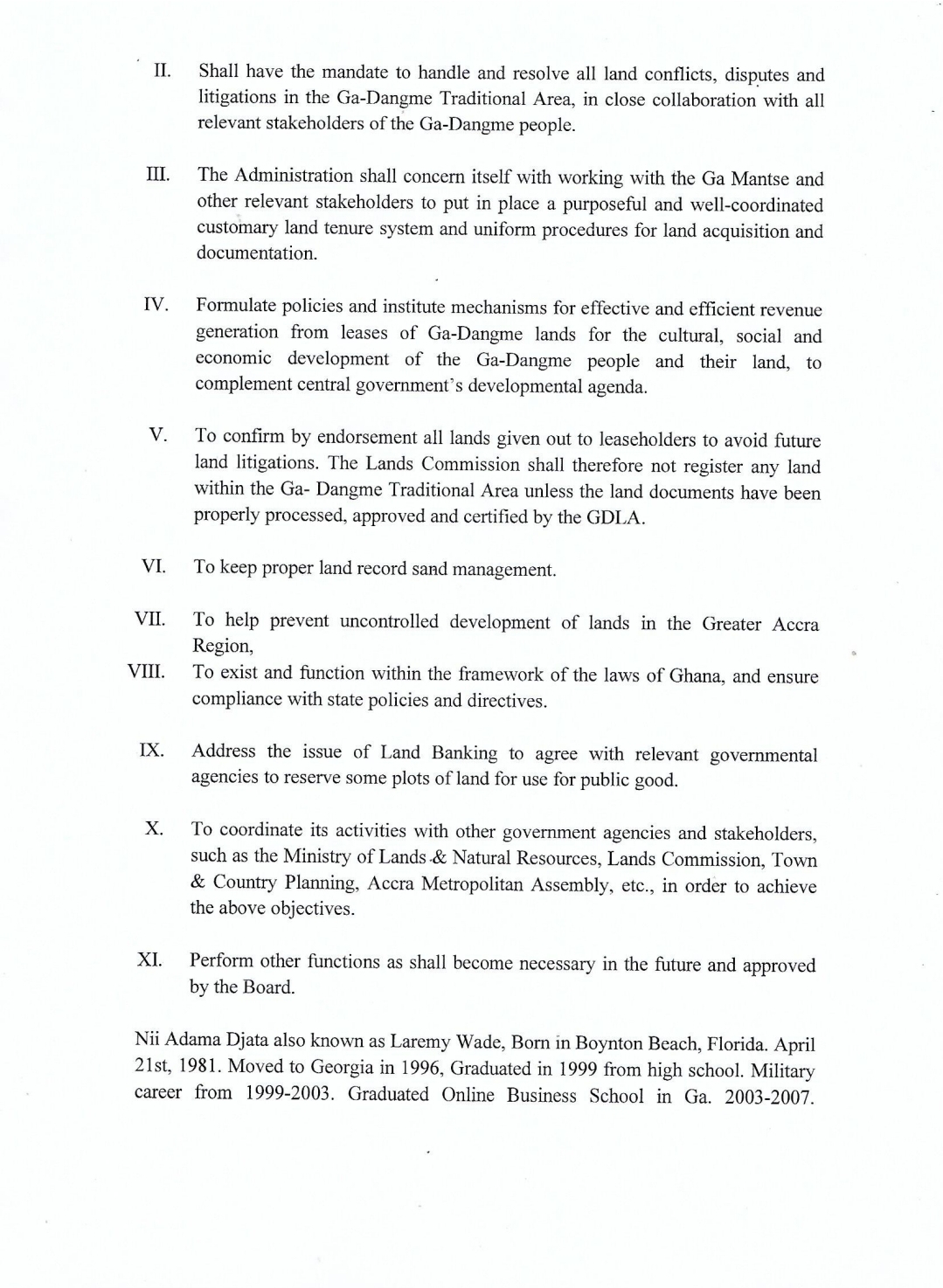 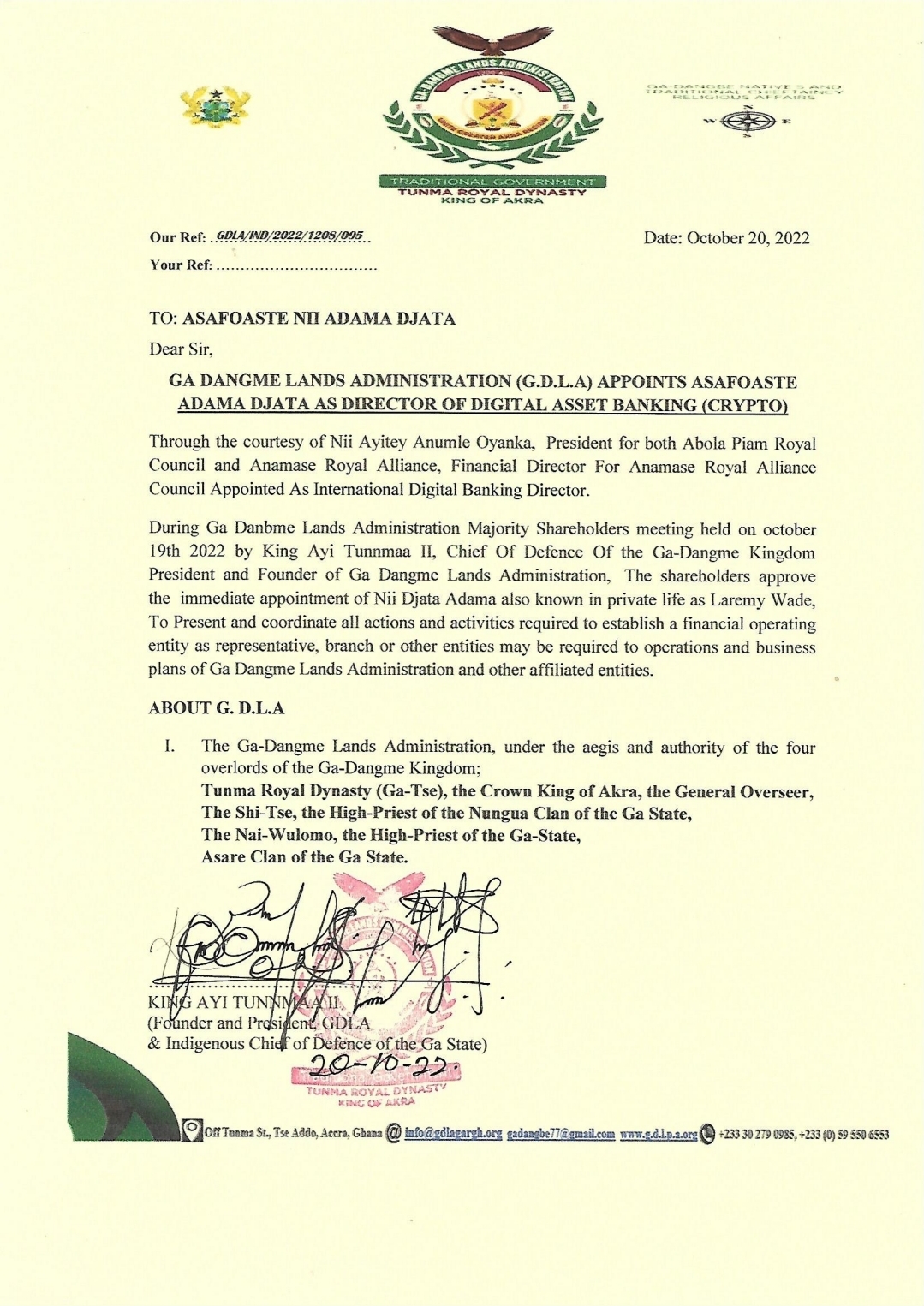 Previous Why Nkrumah rejected an IMF programme in 1965
Next Ashanti’s are not part; it is your subjects who are witches and villagers – Opambour blasts Okyenhene