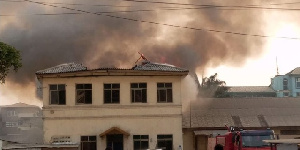 Fire has gutted a two-storey building behind the First African House property formerly known as Tobacco House at the Kwame Nkrumah Circle opposite GCB Towers in the Klottey Korley Constituency of the Greater Accra Region.

According to an eyewitness report, the fire started at about 7 AM today, Friday, February 4, 2022.

Accra100.5FM’s Captain Smith, who reported from the scene, said the fire outbreak was discovered by a driver who was billed to pick a car parked at the premises of First African House.

He said firefighters got to the scene with three engines to prevent the blaze from spreading to other properties.

One of the trucks had to refill at a fire hydrant close to the Odawna Pedestrians Shopping Mall.

Some onlookers told the Accra FM reporter that they taught someone was burning rubbish when they first saw the smoke billowing from the property in the early hours of the morning.

The eyewitness said the affected property was preparing for a funeral and the family was about to go for the corpse ahead of a vigil tonight.