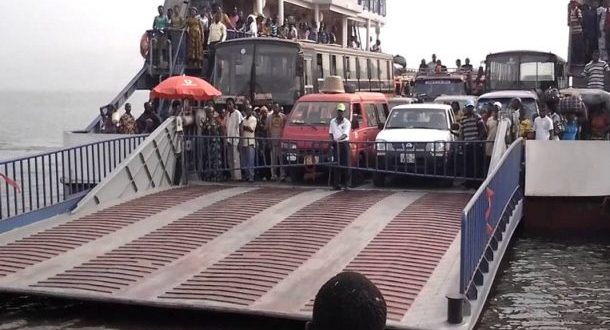 Scores of passengers and goods got stuck on River Afram after a ferry transporting them developed a mechanical fault.

The ferry was transporting scores of passengers including trader and Cargo vehicles loaded with goods from Ekye Amanfrom towards Adawso in Afram Plains South at about 4:00 pm on Monday.

The engine stopped working after the pontoon was hit by a storm while moving. It was subsequently dragged to the downstream by the wind to anchor on the deepest side of the river.

It took the intervention of some local boat operators to rescue the passengers on board the ferry to the shores of the river. However, Cargo vehicles and passenger vehicles are still stuck on the river.

A tug boat from Volta Lake Transport company is expected to pull back the ferry.

The Ferry has been operating on a single-engine for the past years after the other engine damaged raising safety concerns.

Gibson Yaw Agyei Danso -Chairman of Ghana National Cargo Drivers Association who was a victim told Starr News “we have complained several times that the pontoon which is operating on a single-engine is not good. The engine of the pontoon has stopped working and has been pulled by the wind to the downstream of the river.

“We the Ghana National Cargo Drivers Association have been complaining that this is dangerous. For the past 8 hours, we are stuck on the river it will take the intervention of tug boat -Queen from Akosombo to come and pull it out”

This is not the first time such an accident has occurred.