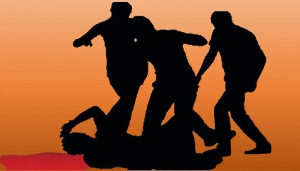 Family of a Cameronian who was lynched to death are currently seeking for justice as they claim their relative was never a criminal as it was alleged. Akroman Betro Stephane, a 44-year-old Cameronian was confirmed dead following a mob attack that occurred at Ahwiaa in the Kwabre East Municipality of the Ashanti region.

The 44-year-old Cameronian who lives in Ghana as a business mogul met his untimely death on Thursday dawn, thus after he had been allegedly attacked with his brother in-law, a 29-year-old Aka Christ on Wednesday night over an alleged snatching of a car and two children.

Whilst some reports suggest the aforementioned allegations, other reports suggest that the two only took someone’s phone. The two were said to have been chased from Adabraka near Pankrono as luck eluded them at Ahwiaa in the Kwabre East Municipality where they received the mob attack.

But for the timely intervention of the Mamponteng police, the two were rescued and later admitted at the Mamponteng government hospital. Unfortunately for the 44-year-old Stephane, he passed on at around 3:30 am on Thursday dawn, according doctors’ report.

A thorough investigation from a security source reveals that the two persons of which one has been lynched, were all innocent. They neither snatched someone’s car, children nor mobile phone as the earlier reports suggested.

Combined police and immigration officers who have been investigating the matter refused to speak on the matter as at the time of filing this report.

But it has been confirmed that a revelation from anonymous security source has it that the said car which was said to have been stolen by the duo rather belonged to them with credible documents backing it.

Police were however yet to establish any accurate charge that led to the brutality of the two victims as no one had officially lodged any complain at the time this story was filed.

Reaction from the deceased’ wife and family:

Mrs. Faha Nadine Victoire who happens to be the wife and brother of the 44-year-old deceased, Akroman Betro Stephane and the other victim, 29-year-old Aka Christ, speaking with journalists said her husband and the brother were both innocent.

According to her, she and the husband peacefully lived in Accra where the husband deals in phones and accessories as a business mogul.

She further revealed that she and the deceased husband earlier travelled to Kumasi for a meeting which has been organised by Cameron nationals in Ghana.

The sad wife revealed that she was in a hotel room at Pankrono when the information came that her husband and her brother had been attacked.

“I immediately called my husband but one guy picked up the call and told me that my husband’s phone had been seized by him because my husband was nabbed as a thief. But when I tried to find my husband’s whereabouts, he hanged up on me. My husband is not a thief, he is a businessman and the car they claim he stole is his own car. I’m disappointed in Ghana people”. she said while weeping.

She has however called on stakeholders to make ensure justice is served and the perpetrators brought to book.

According to her, the husband left behind three children.

Meanwhile, some family members have declared the innocence of their two relatives and called for justice to prevail.

They also appealed to the police and the immigration officers to as a matter urgency take charge of the matter.

In related development, information gathered revealed that the surviving victim was carried along with the police to help in their investigation.

Reaction from the MCE:

Meanwhile, the MCE for the area, Hon. Opoku Agyemang Bonsu has urged the police to thoroughly investigate the matter and bring the perpetrators to book.