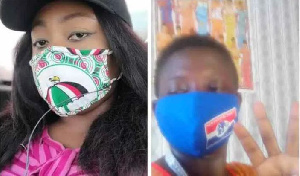 Face masks branded with the respective political emblems of the National Democratic Congress (NDC) and the New Patriotic Party(NPP) are selling like hot cakes in parts of the Ashanti region and have become a sort of competition among members of both parties.

It is not clear how it begun but suddenly people are wearing the political party branded face masks not only to protect themselves from COVID-19 but also to make identify their political linage.

It is also not certain whether the political parties are themselves behind the branding of the masks or whether private merchants have decided to adopt the sale of the brand masks as a smart business strategy.

What is certain is that they are selling like hot cakes and the competition among members of both parties is encouraging more people to wear the protective masks.

Though the origin branded masks is not confirmed, the two parties are relying on them to campaign for votes and the strategy has been welcomed by supporters of the NDC and NPP as they confidently wear the branded face mask in public.

Prior to the face mask campaign, the two parties had also branded food items such as bags of rice, bottled water and hand sanitizers with their party paraphernalia and donated them to the people.

The government had imposed partial lockdown on some areas in the Greater Kumasi and Greater Accra to stop the spread of the virus and the NPP and NDC quickly took advantage of the situation.

Some political connoisseurs, who demanded anonymity, have insisted that the behaviour of both the NDC and the NPP was a clear indication that the political parties are desperate for power.

According to them, the Covid-19 is a dangerous virus that is causing nightmarish experiences for the entire world therefore it is unacceptable for the NDC and NPP to use it to campaign for votes.

The Covid-19 is reported to have started from far away, Wuhan in China, during the latter stages of 2019 but it has spread across the globe, including Ghana, where over 1,000 people have been infected.