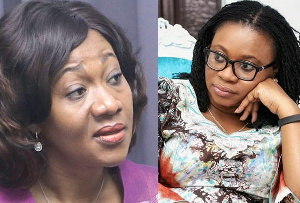 Founder and leader of the United Progressive Party (UPP), Akwasi Addai Odike has faulted the Chairperson of the Electoral Commission, Jean Mensa for wallowing in the same mistakes that led to the dismissal of her predecessor, Madam Charlotte Osei.

On June 28, 2018, President Akufo Addo removed from office the Chairperson of the Electoral Commission, Mrs Charlotte Osei, and her two deputies, Mr. Amadu Sulley and Ms. Georgina Opoku Amankwah, with immediate effect, after the Committee set up by the then Chief Justice, Justice Sophia Akuffo, pursuant to Article 146(4) of the Constitution, to investigate separate complaints brought against the three persons by Ghanaian citizens, recommended their removal from office.

A statement signed and issued by the Minister of Information at the time, Hon. Mustapha Abdul Hamid said, “The Committee recommended their removal on the basis of stated misbehaviour and incompetence, pursuant to Article 146(1) of the Constitution.”

“The provisions of Article 146(9) of the Constitution require the President of the Republic to act in accordance with the recommendations of the Committee.”

But contributing to discussions on Kumasi-based Angel FM, Mr Odike said, the Electoral Commission and its Chairperson are being “micromanaged” by the government to do its bidding of organizing elections under dangerous circumstances with a questionable new voters register, “walking in the same mistakes Madam Charlotte Osei made”.

“The concentration of the whole world is on the fight against COVID-19; the world is not normal anymore, economies are shaking so if we do not get a well grounded footing and we rush into this election haphazardly and anything triggers, Ghana would be doomed. I appeal to the Electoral Commission and the government of the day to not rush us into the election, until normal times are restored”, he said.