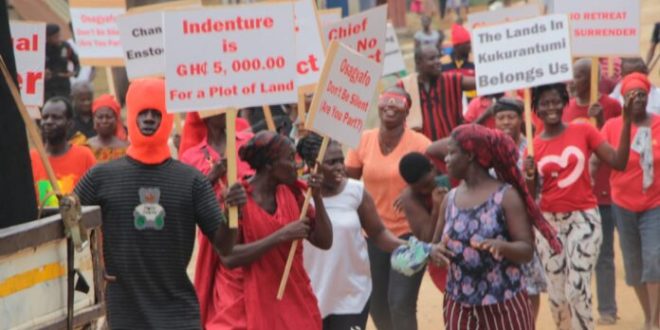 E/R: Families demonstrate against chief over indiscriminate sale of lands

A group calling itself concerned Citizens of Kukurantumi made up of various families and clans in Akyem Kukurantumi in the Eastern region demonstrated Friday, August 19, 2022 against the Chief of the town Daasebre Boamah Darko over indiscriminate and illegal sale of family and individual lands in the town.

The demonstrators including old men and women clad in red apparel marched through the streets hoisting placards with various inscriptions such as “Kukurantumi arise and fight to the death, think of the unborn generation, Osagyefuo don’t be silent or Are you part ”

According to the demonstrators, the Chief of Akyem Kukurantumi Daasebre Boamah Darko II in connivance with some sub-chiefs and emissaries are selling family lands illegally to sand winners and unknown investors without the consent of the land owners.

“Some of these lands are sixty acres and above with cocoa on them. Even a cocoa farm on the stool has been sold to sand winners, this demonstrates that he did not come as a servant of the town brought to serve but rather to dissipate our properties bequeath to us by our forefathers for his personal gains ”

The demonstrators contend that the lands are families and individual lands contrary to the claim by the Kukurantumi chief that it is stool land.

They said the chief threatened to eliminate anyone who attempts to litigate against him on the land. They also alleged that the chief has been using the military to terrorize them.

“We plead with you to let the Army Supremo Brigadier Oppong Peprah call his men to order. Kukurantumi lands are not military lands. They belong to Kukurantumi citizens and Okyeman”

The demonstrators say the action of the chief has deprived hundreds of peasant farmers of their livelihoods since their farmlands have been taken away from them.

The demonstrators led by William Kofi Okraku petitioned the Abuakwa North Municipal Chief Executive to be forwarded to the presidency and Okyenhene to avert bloodshed.

In the petition, they stated among other things that ” we members of concern citizens of Kukurantumi have ban Amy sale of land in the town. We have mentioned the names of the emissaries including the surveyors to desist from their activities as the citizens have decided to take the law into their own hands”

The MCE for Abuakwa North, Alhaji Umar Bodinga said he will forward the petition to the appropriate quarters but denied knowledge of military involvement in any land-related activities.

However, the residents insist that “on the 18th of August, 2022, we had information that he has engaged some military personnel on this heinous crime he is perpetrating on his kings’ men”

The Kukurantumi Chief who is also Adontenhene of Akyem Abuakwa Traditional Area, Daasebre Boamah Darko II however maintained that the land is stool land belonging to Akyem Abuakwa traditional area.

Therefore as an allodial custodian of the land, he has the power to lease the same to investors to enhance development and job creation.

He admitted to bringing the military but said they were for demarcation of boundaries. The chief stated that “he owes nobody accountability on the land sold as same is used for developmental projects”.