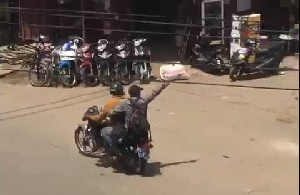 Some traders at Allabar and Aboabo Station in the Kumasi Metropolis who witnessed the gruesome robbery and shooting incident in the area have disclosed that the robbers made away with over 400,000 Ghana cedis.

Seven armed robbers on Friday, October 30, 2020, invaded Kumasi Allabar with AK-47 guns and machetes killing one person in the process with four others sustaining severe injuries.

Speaking to OTEC News Kwame Agyenim Boateng, one of the victims and a trader at Allarbar said the robbers were on a shooting spree after storming the area at about 12:00 PM in the afternoon.

Recounting the event, one of the victims, name withheld said the armed robbers were carrying “Ghana must go” bag full of money from forex bureau and mobile money vendors.

“I was in my office when the robbers came with guns demanding for money, they told me they will shoot if I fail to give them all my sales…we had already prepared about 250,000 Ghana cedis for the bank when they arrived with guns and made away with it,” he said.

The Ashanti Regional Police Command has begun investigations into the matter.

On Friday 30th October 2020 at about 12:10hrs a gang of about 7 men armed with guns and machetes riding on 3 motorbikes stormed the main Alabar Street and robbed some traders of an unspecified amount of money amidst firing.

4 of the victims sustained injuries with one person pronounced dead at the Manhyia Government Hospital. The deceased has been identified as Nuhu Fuseini age 54 an onion seller at Alabar

The other 4 are responding to treatment.

3 suspects have been arrested namely Hamza Nuhu, 22 he was shot in the right thigh by police during the pursuit and currently on admission at KATH under police guard.

The others are Salifu Iddrisu, 18 and Ali Razak also 18. They are on detention to assist in police investigation, whiles manhunt has been launched for the arrest of the remaining robbers.