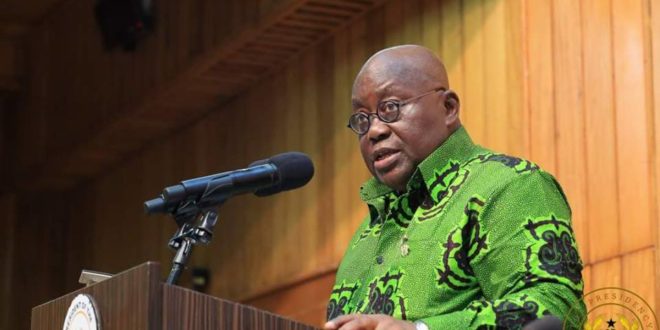 Be champions of law and order – Akufo-Addo to Ghanaians

President Nana Addo Dankwa Akufo-Addo has made a passionate appeal to Ghanaians wherever they find themselves, to champion the cause of the rule of law as well as the maintenance of law and order in every facet of society.

Speaking at the formal launch of the Judicial Service of Ghana’s “E-Justice Project” on the 20th of March, 2019, at the Auditorium of the Law Court Complex, President Akufo-Addo said “Respect for law and order is the foundation of every organized and progressive society. As we seek to move our country to a situation beyond aid, I urge all Ghanaians to be natural champions of a law-based state whose establishments are solid enough to sanction effectively vigilantism, bank frauds, cyber frauds, illegal mining, identity thefts, stealing of public funds, bribery and corruption, criminal cartels and criminal behaviour in general, including assault on and by law enforcement officers.”

On the establishment of the new E-Justice system, President Akufo-Addo, said he hopes that the system will not suffer the legal challenges that the introduction of the “Fast Track Courts” he introduced as Attorney General under the Kufour Administration suffered.

“I hope that the project we are inaugurating today will not suffer the same fate as my last involvement with the modernization of the judicial process when as Attorney General, the government of that outstanding Ghanaian statesman, the second President of the Fourth Republic, His Excellency, John Agyekum Kufour, I assisted in the introduction of the “Fast Track High Court” of the High Court of Justice”.

The President further recalled that, “In the case of Tsikata verses Attorney General, reported in (2001 – 2002, 2 GLR 1), held in a 5:4 decision that the concept of the “Fast Track High” was unconstitutional and therefore struck it down. It took a vigorously argued successful review application to correct the situation to allow the modernization endeavor to succeed. I am sure this project will not go down the same road,” President Akufo Addo said.

The Chief Justice, Sophia Akuffo, in her address said interference and sabotage of the new E-Justice system will not under any circumstances be entertained. She served notice that any staff of the judiciary who is found sabotaging the system will be seriously dealt with.

She registered her thanks to the World Bank, the Ministry of Communications and all other stakeholders who have contributed to the establishment of the E-Justice paperless system.

She was full of praise for the supervising judge of the Judicial Service of Ghana responsible for the E-Justice Paperless Court Project and a justice of the Supreme Court, Justice Samuel Marful-Sau, for his dedication and commitment in ensuring that the E-Justice system became a reality.

On the issue of decent accommodation to house Ghanaian courts across the country, Chief Justice Sophia Akuffo, drew the attention of the President to the fact that urgent support is needed by the Judicial Service to give a facelift to buildings housing the nations courts.

President Akufo-Addo in response to the request by the Chief Justice assured her that sooner rather than later, she would be made aware of government’s concrete measures to address the problem.

Minister for Communications, Mrs. Ursula Ekuful, stated in her remarks that as the Ministry which has oversight responsibility over all forms of communications in the country, her outfit will continue to ensure the digitization of all arms of government and state institutions.

“The digital revolution is quietly unfolding and we are living witnesses to its positive transformative power. The Judicial Service is also feeling it now. We say it is “digitime” in Ghana,” Mrs. Ursula Ekuful said.

E-Justice (also called Paperless Courts) is part of the Government of Ghana’s e-Transform Programme that seeks to automate the existing manual filing systems within the Court’s Registry; i.e. from filing of cases to the execution of court decisions. It is simply an electronic case management system for the registry-side of the entire court process.

A “proof-of-concept” pilot project is currently being implemented at the Law Court Complex, which houses 44 High Courts. This project is wholly sponsored by the World Bank. E-Justice simply provides the electronic platform for filing, process services, fees assessment and payment, allocation of cases to courts/judges, judges’ calendar management and the execution of processes for all cases filed at the Registry of the courts.

It also interfaces with the Digital Transcription Systems (DTS) for the digitization of courtroom proceedings and transcriptions. The Ministry of Communications is the implementing agency and a South African firm, Messrs. EOH, is the Solution Provider, with an American company, Messrs. Leading Associates, offering the Consulting Services for the project. Filing of cases using the system will and can be done in two ways. The first is those who walk into the courthouse can get the documents assessed and filed at the Service Bureau Centres that are licensed by the Judicial Service to do that. The second option is online users can file using an internet portal.

Payment of fees and charges will be made using the online portal which accepts payment for the following instruments: Debit/Credit Cards (International) – VISA, Debit/Credit Cards (Local – Ghana), Mobile Money Payments, and Bank Transfer. Court users can also make payment for documents filed at the various pay points managed by Ecobank, at the Law Court Complex.