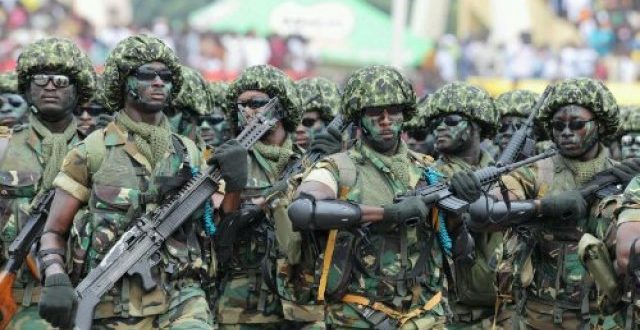 AUDIO: Troops in V/R: NDC, chiefs ready to trigger ‘plan B’ if…

Members of Parliament and other officials of the National Democratic Congress (NDC) will meet with chiefs in the Volta region on their next step as an ultimatum to government to withdraw troops from the region expires.

The meeting, scheduled for later this week “or the weekend” will deliberate on how to approach the continuous military presence in Ketu South, North Tongu MP, Samuel Okudzeto Ablakwa has said.

The legislator said he was unable to disclose what the next line of action will be.

He said the their next line of action would be revealed after the meeting with the chiefs of the area who the NDC say are equally concerned about the presence of the troops.

The military men, locals and the NDC allege, are harassing residents in the area.

The opposition party has said the troops have been deployed with the single purpose of suppressing votes in their stronghold.

As compilation of the new voters register begins, the NDC say they see the presence of the troops in the region to mean intimidation of residents to stay away from the ongoing exercise.

But the government denies this strongly.

According to Defense Minister, Dominic Nitiwul and President Nana Akufo-Addo, the troops are simply to strengthen security at the border as part of Covid-19 restrictions.

The NDC, however, remains unconvinced, with their resolve strengthened by comments from Adansi Asokwa MP, K.T. Hammond who said the troops were deployed to ensure foreigners do not get onto the voters register.

The government, however, says Mr Hammond’s words should be ignored because he is not a member of government and does not speak its mind.

Listen to the audio below for more: