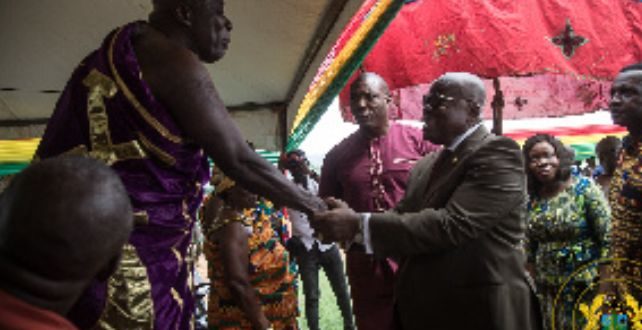 Share
Diplomat and former Ambassador of Ghana to several countries including America and Canada, Daniel Ohene Agyekum, has issued a stern caution to Ghanaians about what he calls an agenda led by President Nana Addo Dankwa Akufo-Addo and some tribesmen of Kyebi to stage a well-calculated agenda for perpetual capture of the seat of Ghana’s governance and its key resources.

Speaking on Ultimate FM’s Cup of Tea with Julius Caesar Anadem monitored by MyNewsGh.com, the former Ashanti Regional Minister pointed to an Ofori Atta authored document whose content spoke to strategies the Akufo-Addo administration was to employ to clandestinely release key resources including the nation’s mineral proceeds and the Electricity Distribution backbones to key persons within the Kyebi fraternity whose membership now hold the fort of the presidency and key ministries in government.

A portion of this document titled Agyapadie to wit valuable property of inheritance read, “The NPP’s agenda for political dominance will hinge on our financial might.”

With Nana in total control of the whole entity of Ghana; when we have finally captured the command and control sectors of our country for our private use, we will then be in the proper stead to wield the political and economic power to control the destiny of this country under Ofori Panin.”

Taking a swipe at a section of the New Patriotic Party (NPP) whom he contended had begun naming the document an NDC orchestrated piece, Ambassador Ohene Agyekum pointed to a part of the restricted document which noted, “to our foremost king, Ofori Panin, for whom and to whom alone this sacred document is prepared.”

“I don’t think that they ever expected that this document will get out. It is restricted. I received a copy of this document after a lady in London in a frantic attempt to reach John Dramani Mahama on the 29th of November 2020 spoke to me. She was so frantic and she claimed that she was a native of the Ofori Panin fie family. Her submission drew my attention to this book and I arranged to get a copy,” he pointed out.

The Former Eastern and Ashanti Regional minister raised pointers in the book that expressed the utter disgust of the authors, at the failure of the Nana Akufo Addo administration to push through the ECG take over and the passage of the Agyapa Royalties listing of the Minerals Income Investment Fund (MIIF)

“With this blueprint, we understand that the NPP government has an agenda to takeover the major economic resources in the country. Particularly our gold resources and for that matter if the government talks about the AGYAPA Royalties. It is to capture that agenda.”

“The takeover of our electricity by the PDS is contained in the book. They say in this book that ‘the electricity takeover would have been handled better but for the greed of some members of the Akyem family.’

“If Ghanaians do not wake up, we are going to rise up in the morning with a dynasty in Akyem Abuakwa exercising full control over resources that are supposed to be used for the development of the people,” he warned.

His assertions come at a time the finance minister Ken Ofori-Atta has given the clearest indication the botched AGYAPA ROYALTIES deal which seeks to raise between $450 million and $700 million on the London and Ghana stock market in return for a 49% shareholding will be returned in its revised form to parliament.

Former president and twice-failed presidential candidate of the opposition National Democratic Congress(NDC), John Dramani Mahama, has stated that the NDC remains opposed to the deal.

The Coalition of Civil Society Organizations which raised teething challenges resulting in the withdrawal of the bill from parliament is demanding greater transparency and a copy of the reviewed document in good faith with their agenda to scrutinize it in the interest of Ghanaians.

Vice president of Policy Think Tank Imani Africa Kofi Bentle describes the deal as another robbery being perpetrated on Ghanaians.

One of his social media posts slamming the deal read: “The grand robbery called Agyapa is still being cooked. Every Bandit will be resisted!! You wreck our nation and now want to steal our God-given resources. What kind of people are you??”