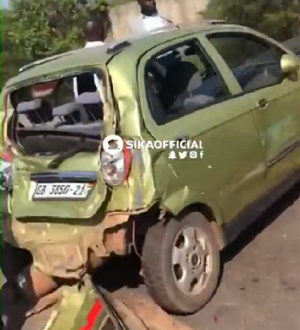 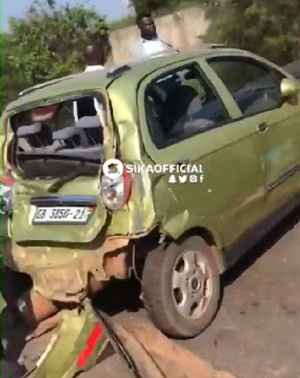 At least six vehicles reportedly crashed in an accident at the overpass near Airport Hills, a suburb of Accra, on Wednesday, October 19, 2022.

According to reports, the accident occurred around 8:40 am on the overpass from the Palace Mall towards the Major Mahama roundabout.

One of the witnesses could be heard saying in the video that at least six cars were involved in the accident.

“About six cars were involved in the accident. Some of the vehicles are over there,” he said in the Twi dialect.

In the video, the KIA Picanto was seen to have crashed into another private car.

The dump truck had also pushed a four-wheel drive off of the road. Parts of the ‘trotro’ were also completely dented.

Some people at the scene can also be seen crying even though there is no report of injuries or deaths.

Reports indicate that the accident happened because the brakes of the dump truck failed.

The Ghana Police Service is yet to comment on the accident.

Previous WATCH: How NIB arrested Captain Smart on a high-way
Next IGP meets traders after the closure of shops in Accra