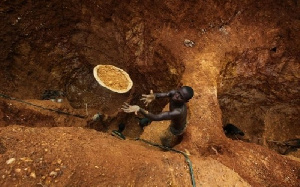 Two illegal miners have met their untimely death with one other person severely injured after a hill close to their mine site collapsed on them.

The three were on their routine galamsey expedition on Tuesday afternoon when the hill, which had developed some cracks, accidentally slipped on Kofi China, 30, and Gyakut, 26.

The injured victim was identified as Yenu Kwaw, 26 years old.

The incident happened at Wassa Adiembra in the Amenfi East Municipality of the Western Region.

The mine site was in a hilly area but a part of it had been excavated to lower ground for easy accessibility in order to mine there.

According to witnesses, the victims were under the rubble for over two hours before a backhoe was organised to the site to evacuate the debris in order to rescue them.

After digging for some few hours, Mr Kwaw was rescued but had all his legs broken.

The rescue exercise was supervised by the National Disaster Management Organisation (NADMO) from the Wassa Amenfi East Municipality.

However, the other two were found dead under the rubble.

Kofi China, who is a Kusasi, had his whole arm chopped off from the shoulder level. Their mortal remains have been deposited at the Wassa Akropong Hospital morgue.

The Wassa Amenfi East Municipal Director of NADMO, Nana Kumi, advised galamseyers to be safety conscious in their bid to make a living through galamsey activities.