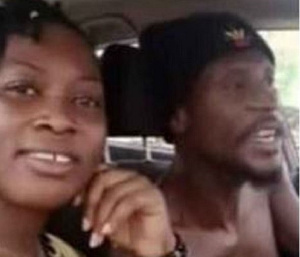 Veteran hip-life artiste, Jerry Anaabaa popularly known as Okomfour Kwadee has been captured in a video ‘painting the town red’ with a lady believed to be his girlfriend.

There were earlier reports that the ‘Ofie Nipa’ hitmaker has been battling with mental challenges which landed him at a rehab center.

It was also reported that he relapsed following few months of making public appearances and releasing a new song after recovering.

Kwadee’s sister who confirmed the news in June 2020, during an interview with Peace FM also mentioned at that time that Evangelist Kenya after chancing upon the sad state of her brother decided to send him back to the rehabilitation canter.

But in a recent development, Kwadee has been seen driving around bare-chested and ‘lovey-doveying’ with an unknown lady.

The lady who claims to be Kwadee’s future wife was captured in the video saying:

“I’m with my nigga. My man to be. My husband to be. I’m his girlfriend whether you believe it or not. And for the record, he is not mad. Those of you saying he is mad should mind their own business with their lose talks,” she said.