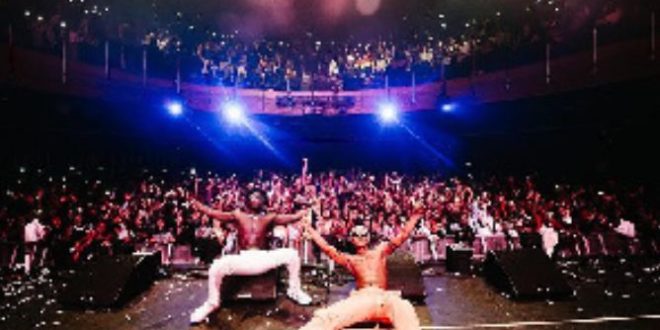 Share
Kuami Eugene and KiDi shut down UK with performance

KiDi and Kuami Eugene have baffled their fans at their sold-out concert which happened in the United Kingdom on Ghana’s Independence Day.

On March 6, the two Ghanaian artistes performed their hit songs in London with over 2,800 people in attendance.

The artistes spread their wings as far as their music careers are concerned to perform their hit songs and connect with fans outside of Ghana.

Patoranking, Sarkodie, Kwabena Kwabena and many other artistes joined the two performers on stage to deliver a mind-blowing show.

KiDi at one point during his performance jumped into the crowd to connect closely with his fans but instead, the women used the opportunity to smooch their favourite artiste’s body and wouldn’t let go.

As of March 5, 2022, the Lynx Entertainment signees had announced that their 02 Indigo Concert tickets were sold out in a post they shared on Twitter.

Ahead of their show in London, the two artistes paid a courtesy call on Ghana’s High Commissioner to the UK and Ireland, Papa Owusu-Ankomah, ahead of their March 6, 2022, concert.

According to reports by myjoyonline.com, they were accompanied by representatives from Lynx Entertainment management, Akwaaba UK, and SMADE Entertainment.

The visit by the artistes and their representatives was to inform the embassy about their upcoming historic concert at the 02 Indigo Arena.

Ghana’s High Commissioner to the UK and Ireland shared his excitement after meeting the Lynx entertainment acts and reminded them about the importance of Ghanaian music as part of tourism, arts, and culture.