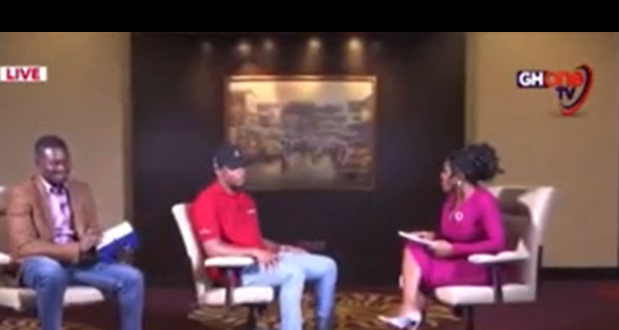 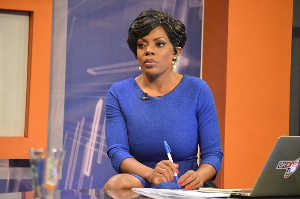 After a forty-minute interview session with Samuel Eto’o Fils, Nana Aba Anamoah, a staunch fan of Manchester United, sought to find out the Cameroon legend’s view on the performance of the English team but the response was obviously one she least expected.

Looking smart in her purple over-the-knee pencil dress with a brooch pinned on her left breast, Nana Aba Anamoah, who completed her looks with simple but glamorous natural makeup and hair extension tied in a ponytail bun, asked the Cameroonian football administrator, “What do you think is wrong with Manchester United?”

Without any assistance from his interpreter, Eto’o, clad in a casual but dapper red T-shirt with a pair of blue jeans, a baseball cap and black sneakers to match, responded, “I don’t know what happened but I’m always Blue”, indicating he is forever a fan of Chelsea.

“I’m so sorry for you,” he added, triggering a response from a broken-hearted Nana Aba.

“This is when we end the interview,” the Ghanaian broadcaster said amid laughter.

Manchester United have been in transition since Sir Alex Ferguson, the club’s longest-serving manager, retired in 2013.

They had not anticipated how difficult the transition would be. Despite appointing five different coaches and signing many great players, including the return of five-time Ballon d’Or winner Cristiano Ronaldo, the team is still struggling to regain their title-contending status and appears to be a long way from winning the Premier League, which they have been chasing since 2013. Their most recent UEFA Champions League victory came in 2008.

Last season, Manchester United failed to qualify for the Champions League. While fans hope that the club’s fortunes will improve this season under new manager Erik Ten Hag, the team currently sits at the bottom of the table after two games.

Eto’o played for Chelsea between 2003 and 2004. He joined the West London club on a free transfer from Russian side Anzhi Makhachkala. Eto’o played under Jose Mourinho, the manager with whom he won the Champions League in 2010.

Eto’o’s only hattrick for the Blues came in a 3-1 victory over Manchester United at Stamford Bridge in 2014.