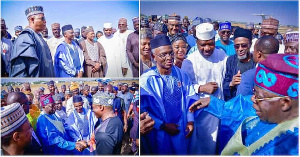 Bola Ahmed Tinubu, the presidential candidate of the All Progressives Congress (APC) has arrived in Kaduna as he prepares to kick off the party’s presidential and governorship campaign rally on Tuesday, December 13 (today).

He was received at Dana Airport by Kaduna State Governor Nasir El-Rufai and the state APC governorship candidate, Senator Uba Sani among other top Kaduna state government officials, according to Channels TV.

Following his arrival in Kaduna, the former Lagos State governor proceeded to Birnin Gwari Local Government Area, one of the councils ravaged by insurgency and banditry.

The reports suggest he will visit the victims of attacks and also get a piece of first-hand information on the devastation of the attacks.

Tinubu is embarking on the two and half hours trip to Birnin Gwari by road, amidst tight security, according to Legit.ng.

The Kaduna state government confirmed this development through a post he shared on Facebook, accompanied by pictures.

Previous Ato Essien pleads guilty, convicted on his own plea
Next ‘Accra Commando’ Slapped in traffic by 60-year-old pensioner