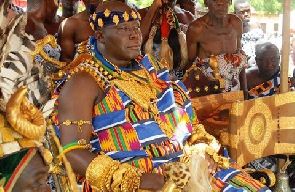 2019 marks the 20th anniversary of Otumfuo Osei Tutu II and as such, the story of how he became the ruler of the most self-sustaining chieftaincy in Ghana is now being retold, thanks to Isaac Kyei Andoh.

When Otumfuo Opoku Ware II died in 1999, Nana Barima Kweku Dua, now Otumfuo Osei Tutu II, was not the legitimate person in line as successor to the deceased ruler but somehow, things fell in his favour.

In the tradition of the Asante, until the line of elderly males to the deceased ruler has been exhausted, responsibility does not transcend to nephews.

Akwasi Agyemang was a cousin to Otumfuo Opoku Ware II and the only male in line to succeed.

Indeed, Akwesi Agyemang lived the most part of his life in the knowledge that he was well placed to lead the Asante after the demise of his brother (really, his cousin, since Opoku Ware II was the son of Agyemang’s aunt).

Agyemang was reportedly excited at the mention of the name Daakyehene (future ruler) because by birth, it was his rightful position.

However, Akwasi Agyemang’s personal life and record made it impossible for him to be deemed fit for that position.

Hence, Nana Barima Kweku Dua, who had the extra advantage of being one of the five children of Nana Afia Kobi, the Queenmother of Asante, became the ruler of Asante.

The Queenmother by tradition elects rulers for the Asante.

Akwasi Agyemang’s fall from grace had been epic. Before the 1979 coup d’etat, he was the chairman of the Kumasi Metropolitan Assembly (KMA).

And as part of the activities that characterised the coup, key people were arrested and given all sorts treatment as punishment.

Akwasi Agyemang was arrested as part of the revolution cleansing. But being overtly political was very much frowned upon for members close to the stool in the Asante royal family.

In view of this, it dented his reputation to some good extent. As part of his punishment, the revolutionary soldiers forced Agyemang to carry human waste in a bucket in public.

It was as much a taboo for an heir apparent to carry anything at all, much more human waste. As fate would have it, Akwasi Agyemang would later become a close friend of Jerry John Rawlings, the leader of the 1979 coup.

Agyemang also became an influential leader of the National Democratic Congress (NDC) and when Ghana became a democracy again in 1992, Rawlings made him the boss of KMA.

The NDC was already an unpopular party in the Ashanti region but Agyemang’s era as KMA boss was also marked by violence and intimidation against political detractors.

He was for instance, accused of leading a demolition exercise that vandalised properties of squatters while some of them were still indoors reportedly killing scores of people in the process.

Indeed, no KMA boss before or after Akwasi Agyemang has been accused of anything close to his level of violence and intimidation.

It is known that at a point, all 46 assemblymen within the jurisdiction of the KMA, signed a resolution not to work with him again due to how he administered his office.

This showed that the people had a rather love-hate relationship with him.

As the final arbiter in who becomes chief, the Queenmother thought his son, Kweku Dua, was a better fit. Dua had after all, spent most part of his life preparing for such a moment and never faulted, at least to the knowledge of the public.

As part of preparing Kweku Dua for such a moment, he was taken to Sefwi Wiaso instead of the prestigious Prempeh College or Opoku Ware Secondary School, purposely to undergo training under the tutelage of Sefwi Wiaso.

When it became apparent that Kweku Dua was going to be the next ruler of the Asante, Akwasi Agyemang reportedly tried to overturn the coming events.

With suspected threat on the life of Kweku Dua, the then regional minister in Ashanti, Kojo Yankah, acted swiftly and deployed military men for Dua’s protection until his coronation.

Without the backing of the regional minister, the suspected last ditch effort from Agyemang proved futile.

Defeat to the NDC in the 2000 elections effectively ended Agyemang’s influence and for 20 years, Kweku Dua has ruled effectively and successfully as Otumfuo Osei Tutu II.