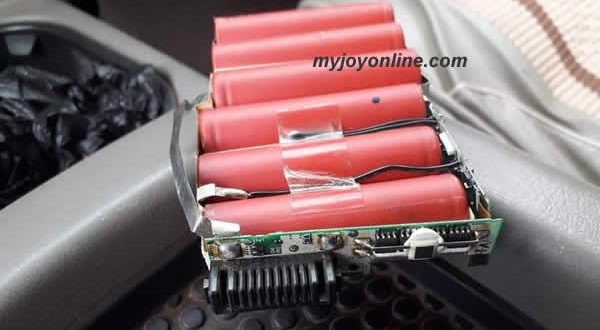 A suspected explosive device has been found in a busy district in the Northern regional capital, Tamale.

It is a five cartridge with a mini-battery connected to a small wire, JoyNews Northern regional correspondent Elliasu Tanko has reported.

It was a street sweeper with Zoomlion who first found it at Abedi Pele roundabout in Tamale after she got ready to start the morning’s work.

The woman gave the device to her brother, Dr Rashid Tanko Computer, who called in the police, Monday afternoon.

The police conducted a counter-terrorism patrol in the city but are yet to confirm if the device is explosive.

Northern Regional Crime Officer Sup. Otuo Acheampong who led the counter-terrorism team to the scene said initial assessment showed “it may be cells in a power bank”

“It is too early and premature to establish the kind of substance it is,” he told JoyNews.