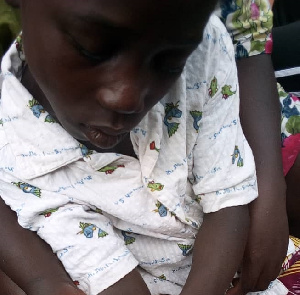 VIDEO: My hands are rotting, please help me – 10-year-old cries for help

A 10-year-old Michael Narh, a resident at Azza, a farming community in the Yilo Krobo Municipality, is going through an excruciating moment in his life after being knocked down by a tricycle two weeks ago.

The little boy’s right hand is almost rotten off as he goes through deep pain. His mother, a single mother of four looks on while his son goes through the trauma oblivious of where to turn to for assistance.

Ghanaweb’s interview with little Michael Narh, was an emotional one as the boy could barely speak but to only cry loud and say “my hands are rotting, help me please.”

Ghanaweb’s enquiry indicated that the boy suffered the injury early February (last two weeks) while he was playing with his peers near the roadside as they live closer to the main Nkurakan-Adukrom road.

He was inadvertently knocked down by a tricycle popularly called ‘Aboboyaa’ which was going towards Nkurakan.

According to information gathered, the aboboyaa rider left him to his fate but returned days after to offer his mother GH5 to buy some porridge for him.

Michael Narh is one of the four children of his poverty-stricken single mother who only lives from hand to mouth in the rural Azza community.

Michael Narh’s mother, Abigail Namo, who was also full of tears and looking almost ignorant about the world she and her children live in had no words to utter.

Meanwhile, Ghanaweb’s Eastern Regional Correspondent, McAnthony Dagyenga, quickly liaised with the Assemblyman for the Abrewankor Electoral Area, under whose jurisdiction Azza falls, to send the boy to the hospital.

Inquiries made from medical experts indicate that fortunately for little Michael Narh, his condition has not reached amputation point even though it was almost too late.

The experts told Ghanaweb’s McAnthony Dagyenga that his condition is a mixed hand infection that would need some surgical drainage to ameliorate the condition.

Little Michael is currently on admission at the Eastern Regional Hospital in Koforidua hoping that his mother would get assistance to settle the hospital bills.

Watch the video below, Viewer Discretion is advised: