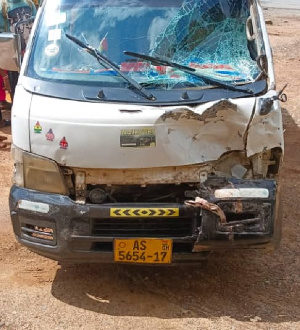 Two separate accidents on the Tarkwa Takoradi road have claimed seven lives while several others were severely injured.

The first accident happened at Dompim which involved a motor rider and an urvan bus with registration number AS-5654-17 where the motor rider died.

The motor rider Nyame Aye Amponsah 33, was riding his unlicensed motorcycle behind a tipper truck from Takoradi to Dompim direction.

A resident of Dompim Stephen Ansah who spoke to GhanaWghaneb said the accident happened on Friday, Dec 2, 2022.

Amponsah met another pothole he tried swerving but unfortunately collided with an oncoming urvan bus with a registration number, where he died.

The accident which happened on Saturday, Dec 3, 2022, killed 4 people on spot and two others died later while receiving treatment at the Tarkwa Municipal Hospital.

Ten other victims are currently receiving treatment at the hospital.
According to sources, the driver of the cement truck Kwadwo Owusu Boateng who is believed to be at fault for leading to the cause of the accident was arraigned before court and is currently on remand.

Speaking to Ghanaweb in an interview; the NADMO Director for Tarkwa Nsuaem Municipality, Mr. Francis Amoah expressed his condolences to the bereaved families.

He cautioned drivers to be careful when using the Tarkwa Takoradi road because of the many potholes on the road.

He explained that “even though the road is under construction, they are many potholes so you have to be extra careful when driving in order to prevent any further disasters like what happened last weekend”.

He added that “in your attempt to swerve a pothole, there could be another oncoming vehicle which causes head-on collision”.