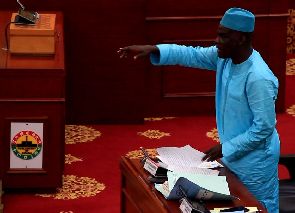 Following news report that Minority leader Haruna Iddrisu admitted that women in the opposition National Democratic Congress (NDC) cannot be trusted because they are dating male Members of Parliament (MPs) in the governing New Patriotic Party (NPP), more tapes are dropping in.

This time, the Minority Leader and key member of the opposition NDC is heard bitterly lamenting about his party’s lack of information on going-ons in the ruling government and party.

He labels it as the NDC’s “greatest weakness”.

In the leaked tape from a meeting allegedly held at the NDC headquarters in Accra, Mr. Iddrisu, National Chairman Mr Ofosu-Ampofo, Alfred Ogbamey among many others are heard outlining plans to deal with the Akufo-Addo government when it comes to Communications.

Haruna Iddrisu on his part stated that picking up hardcore intelligence on activities of the ruling New Patriotic Party (NPP) has been a major challenge for the NDC.

According to him, “one of the major, major weaknesses today is poor intelligence on the NPP.”

He identified the existence of serious challenges in the NDC communication machinery.

He lamented for instance how the NDC was largely clueless as to the real purpose of President Akufo-Addo’s “surprise, impromptu” visit to South Africa this year.

In the same leaked tape saga, CID last week charged Mr Samuel Ofosu-Ampofo with four charges of conspiracy to cause harm, assault and rioting based on his portions of the tape, which he maintains have been “doctored”.

Mr Ofosu-Ampofo refused to comment on the tape after it was played for him by the CID. He insisted it was doctored.

He was granted bail in the sum of GHS400,000 with two sureties and is to appear before the CID again on Thursday, 7 March 2019.