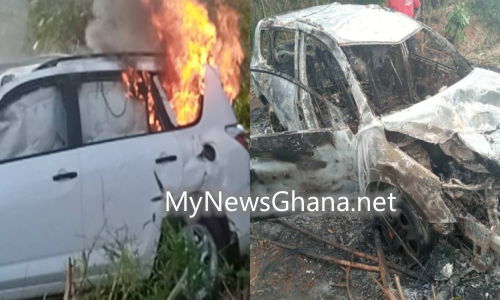 A Toyota 4X4 with registration number BA 1633-19 has been burnt to ashes at Sefwi Afere in the Bodi district of the Western North Region.

The car which was set for an engagement ceremony at Sefwi Antobia in Juaboso district was set ablaze by angry mob after the driver identified as Patrick Fuakye knocked down three pedestrians.

The mob descended on the driver who quickly rushed to the Sefwi Juaboso police station for protection.

After the driver escaped, the mob decided to burn the car. They claimed he was driving recklessly leading to the accident.

The deceased has been deposited at the morgue while the survivor, said to be in critical condition has been referred to Komfo Anokye Teaching Hospital.