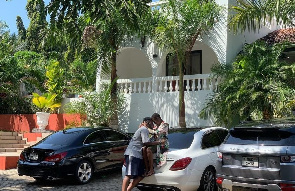 Some military men are reported to have stormed the house of AMG rapper Medikal and seized all his cars including the ones he bought for his girlfriend actress Fella Makafui.

According to sources, the military men acted after picking information that Medikal’s cars were reported as stolen vehicles from the United States of America.

The source was quick to add that the raid by the Military personnel happened before the rapper flew to London some weeks ago.

Apparently, the military also picked information that musician might have evaded tax by not paying the required duty stipulated by law at the harbour when clearing the cars as he might have used dubious ways to retrieve them when they arrived at the shores of Ghana.

According to a media report, Medikal’s Benz was the only car the Army officers left behind, but he has removed the Customised number plate for reasons best known to himself, he added that Fella Has been Coming to Medikal’s house in an Uber car.

So far Medikal’s Benz is the only car that was not taken by the military personnel from his lakeside estate house.

Previous VIDEO: Pastor Baths Church Members With Coca Cola
Next Only heaven can feel better than a man sleeping with a woman – Prophet Kumchacha