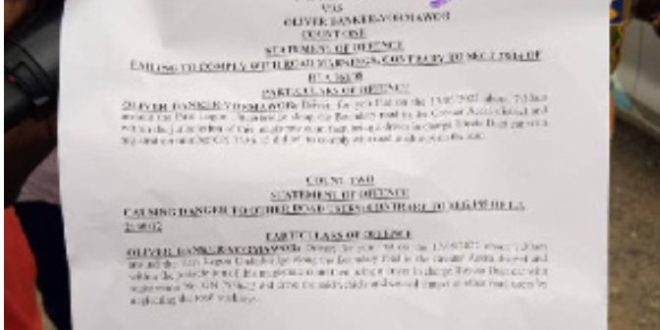 Two more people have been arrested by the Ghana Police Service following the arrest of #FixTheCountry convener, Oliver Mawusi Barker-Vormawor, on Tuesday morning.

The activist was arrested on May 17, 2022, and charged with various counts including failing to comply with road markings, causing danger to other road users as well as engaging in careless and inconsiderate driving.

In a related development, the police have reportedly arrested another member of the #FixTheCountry movement as well as a journalist with Metro TV.

This has been reported by Metro TV’s news Anchor, Bridget Otoo.

“Barker Vomawor arrested, Benjamin Darko of #FixTheCountry has also been arrested and @metrotvgh reporter has also been detained for taking a photo of a charge sheet. @GhPoliceService. I wish you would use same speed to arrest and detain the murderers of Ahmed Suale,” she wrote in a Twitter post.

Barker-Vormawor is already facing charges for allegedly threatening to overthrow the government in a coup d’état.

He was arrested on February 11, 2022, and spent over a month in the custody of the police. He was subsequently granted bail by a Tema High Court.