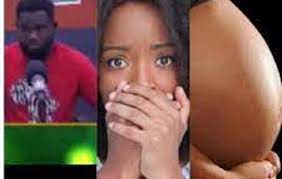 The effect of heartbreak is dawning on a gentleman identified as Bright Nana Kwame after finding out in the worst way possible that his lover is engaged.

Bright, who was confident of being a first-time father, has been left devastated after finding out his heavily pregnant lover tied the knot just five days after leaving his home.

As if the heartbreak is not enough, Awo’s newly-wedded husband (Steve) is challenging him on the paternity of the baby.

Present at Nhyira FM‘s studio for the Obra show, Nana could not fathom how Awo tied the knot on Saturday after leaving his home on Monday.

He narrated how she spent the weekend with him after she was in his town to make her hair.

Unbeknownst to Nana, the hairdo was one she fixed ahead of her traditional wedding in a nearby town.

The secret was brought to light when Steve, Awo’s legitimate partner called to inquire who he was and why he was frequently calling his wife at odd hours.

It was then, he said, Steve introduced himself and added that he is the father of Awo’s previous child.

Nana said he almost slumped when Steve noted that he had been courting Awo for the last 10 years, which has produced a seven-year-old boy as well as the one on the way.

The news seemed false as Nana added that Awo’s parents are aware she was cohabiting with him, and he has already been accepted as the father of the baby.

Rather than bringing an end to the fiasco, Awo made the two men heave a sigh of disbelief when she confessed she is uncertain which of her lovers could be the biological father.

She stated that she had been having romantic rendezvous with the gentlemen simultaneously in a manner none of them suspected they have rivals.

Currently, the two men are awaiting DNA to confirm which one of them is the ‘winner’. They have coincidentally decided to name the child Bright, but the DNA will determine which surname will be added.