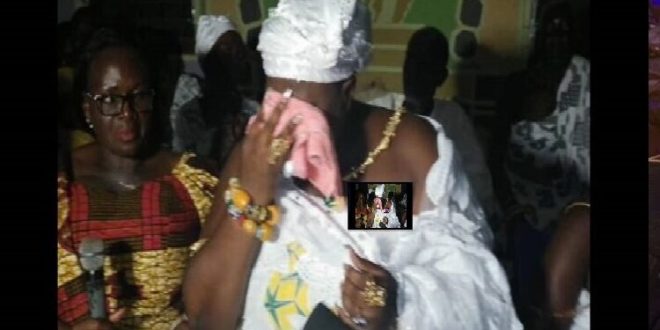 [VIDE0]: Queen Mother sheds tears as Asuboni No.3 gets electricity after 508 years

The Queen mother of Asuboni No.3, a suburb of Nkawkaw in the Kwahu West Municipal Assembly of Eastern Region Nana Tenewaah Safoa II, could not hold her tears during the commissioning of the electrification project in the area.

The community after 500yrs has finally benefited from the national grid. A ceremony held yesterday at the Palace witnessed a remarkable atmosphere where the entire community expressed appreciation to government for making history in the area.

Addressing a gathering on Tuesday 24th November 2020, Nana Tenewaah Safoa II recounting the memories of challenges they’ve been through showed much appreciation to the Deputy CEO for Middle Belt Development Authority Lawyer Joyce Opoku Boateng for her immense contribution towards this development.

According to the queen mother, she had the opportunity to meet Lawyer Joyce Opoku Boateng during the NPP Primaries; and put before her one major challenge confronting the community, thus lack of Electricity.

“Lawyer Joyce Opoku Boateng did not hesitate and pushed so hard to ensure she forfeit her promise and today we are experiencing this massive development’’. She said.

The queen mother also used the opportunity to appeal to government to assist them with road networks, Health Center, Schools and also help develop the waterfall in the area.

Asuboni Waterfall is one of the most beautiful tourist sites in Kwahu of the Eastern Region which attracts visitors who troop to experience the unique atmosphere.

The MCE for Kwahu West Hon Yaw Owusu Addo told Agoo News this will create a small-scale business enterprise as Asuboni No.3 is on the verge to develop.

On her part, Lawyer Joyce Opoku Boateng said, “when I met the ECG, I realized Asuboni No.3 was not included so far as the selected communities on the National Grid are concerned. So what I did was that I immediately contacted the deputy Energy Minister Hon Owireku Aidoo. He did not disappoint me at all and today we are seeing this development. I promised Nanahemaa that, I will do whatever I can to make sure Asuboni No.3 benefits from the National Grid but let’s give thanks to President HE Nana Addo Dankwah Akufo Addo for always listening to the cry of the people. In order to develop our community, we must give Nana Addo for more years and vote for the parliamentary candidate Joseph Frempong to move our community and the nation forward.’’

Some children who spoke to Agoo FM News Ebenezer Kojo Nyavor were much excited over the electrification project adding “we’ve been through mess for the past years but from now on, we are going to learn so hard and one day a president will come from Asuboni No.3’’

The NPP Parliamentary Candidate for Nkawkaw Constituency Joseph Frempong said he will do his best to support education in the area. He assured to address other challenges confronting residents at Asuboni No.3 and the entire Nkawkaw Constituency from 2021 when voted to hope for another 4 term for the NPP.