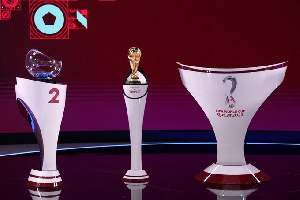 The draw for the group stage of the World Cup will take place on Friday, April 1 at 12:00 pm ET, at a gala event to be held at the Doha Exhibition and Convention Center in Doha.

The draw will determine the composition of the eight groups of four teams that will make up the first phase of the competition.

Once the 32 teams have been divided into eight groups, it will be time to look ahead to the knockout rounds, as the schedule of matches has already been determined.

Ghanaians will be watching this draw keenly as they hope for a ‘good’ draw in the 22nd edition of the FIFA World Cup for the Black Stars.

Ghana qualified to the Mundial for the 4th time in its history after seeing off West African neighbors Nigeria in a two-legged tie in the final playoff games.

Ghana alongside the thirty-one other qualified countries including the four other reps from Africa will know their fate as far as the Mundial is concerned after the draw.