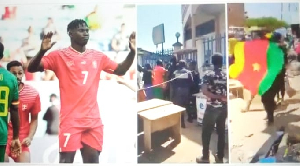 In the viral video posted on Tiktok by user “cabay_9” captured an attack on the family house of Switzerland striker Embolo in Yaounde, Cameroon by angry fans in protest.

However, the Cameroonian-born Swiss striker refused to celebrate his goal and raised both hands gesturing an apology to the Cameroonian supporters for what many have called “a sign of respect for his homeland.”

According to reliable source, the Swiss striker Embolo was born in Yaounde, but following the split between his parents, he traveled to France with his mom who was studying at that time and there she met her Swiss husband.

There is a long list of born African players representing non-African nations in the ongoing 2022 World Cup in Qatar.