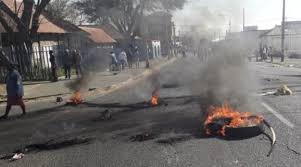 Protesters in Turffontein, Johannesburg, looted shops as they demonstrated in the area on Monday morning.

Police were on the scene but residents in the area outnumbered them.

Several protesting residents told News24 they wanted foreigners to leave the area, claiming that they were behind drug-dealing in the area.

Less than 24 hours earlier, residents in nearby Jeppestown and Malvern also looted shops while damaging property and cars in two separate incidents of violence.

The looting in Jeppe was sparked by the death of three people in a building fire.

“It is a sad day when people choose to capitalise on the misfortune of others to advance anarchy or criminality. Three people perishing in a burning, collapsing building can never justify what is now happening in Jeppestown, Malvern and surrounding areas. With such a tragedy, the community should be uniting to assist those affected instead of seeing an opportunity to commit crime,” said Mawela.

The provincial police said officers were “on high alert and monitoring” Reiger Park and Oakmore in Tembisa, following several attacks on shops in those areas.

Officials said two armed men were shot and killed in Tembisa while trying to rob a shop there. The shop owner was not harmed.