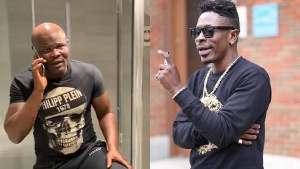 Ghanaian boxer, Bukom Banku, has emphatically stated that he is popular than Shatta Wale and he is supporting his claim with historical facts.

During an interview on Hitz FM, the boxer, real name Braimah Kamoko whilst talking about his influence in Bukom, a Ga community in Accra, said that he is the second most popular Ghanaian and Shatta Wale does even come close to his fame.

The conversation about his fame kicked off when the presenter addressed him as Shatta and he said “ I am Banku, Shatta is somebody’s name. Call me second President in the Nation”. When asked why, he replied, “They know me pass everybody, 20 years popular, 1999 17th August up till now people call my name”.

Setting his fame apart from the controversial dancehall act, Bukom also known and loved for his broken English, added that “Shatta Wale be small, six years popular. 1999 17th August and I make name and till now I am still reigning”.

The boxer was asked if he can face Shatta Wale in a ‘beef’ and he said “Shatta? KG people they are students, Shatta Wale I go bomboclat him in the Nation. Me and Shatta who be supper? Don’t see the gold”. The 39-year-old emphasized that Shatta Wale’s influence shouldn’t mislead people to think he (Bukom) is less.