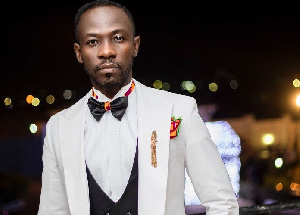 Flowking Stone is a better rapper than I am – Okyeame Kwame

Rap Docta, Okyeame Kwame has touted the rap prowess of his brother, Flowking Stone, by naming him as his favorite rapper in Ghana.

Okyeame Kwame in a Q&A with his fans on his Instagram page, answered a question from one of them who wanted to know who his favorite rapper was.

In response to the question, Okyeame Kwame nominated his brother and said he didn’t do that because he was his blood but because Flowking was better than him.

He said Flowking Stone was the most complete rapper especially with his lyrics and his flow.

“My favourite rappers in Ghana are @realflowkingstone (Flowkingstone) not because he is my bro but because he is better than me. He is the most complete rapper in Ghana, lyrics and flow. Favorite in America is @bustarhymes.”

Flowking Stone is undoubtedly one of the best rappers in the country and he is known for such hits as ‘Go Low’, ‘Fire Bon Dem’, ‘Blow my mind’, ‘Bumper’, among others and has collaborated with music giants such as Sarkodie, Shatta Wale, etc.

His latest songs, Quarantine flow and Survive was released to help educate people on the deadly coronavirus as the world struggle to deal with the deadly disease. 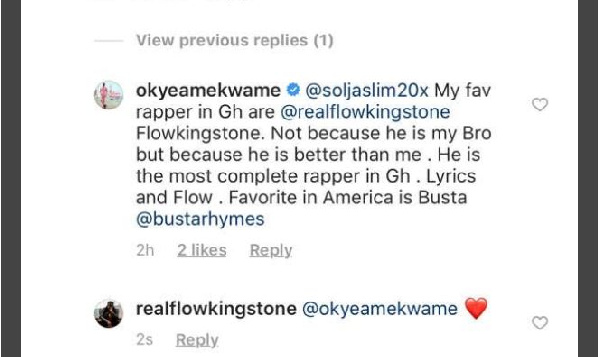 Previous Call us if your lights are off – ECG on ‘dumsor’ after rainstorm
Next Border closure: We’ll deal with illegal immigrants, Ghanaian accomplices – Nana Addo