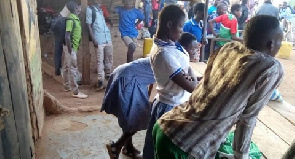 Information reaching D?GN Online indicates that some students of the Chereponi Senior High School in the Chereponi District of the North East region have fled campus over possible reprisal attacks between the Chokosis and Konkombas.

D?GN Online gathered that some parents called their wards to move out of campus back ?home for their safety due to some signals picked over a possible reprisal attacks.

Students of the school believed to be konkombas were spotted at the Chereponi lorry station with their luggages on Sunday and Monday returning to their various homes.

It will be recall that a fight erupted between the Chokosis and Konkombas over a piece of land in the Chereponi District last year.

The conflict resulted in the burning of over 150 houses, with death toll at about 15.

DGN Online? gathered that pregnant women in some deprived communities in the Chereponi ?District cannot access any health facility due to the violence.

Women and children in the affected communities have also travelled to Tamale and Togo to ensure their safety.

When ?D?GN Online contacted the Assistant Headmaster of the Chereponi Senior High School, Mr. Osman, he confirmed that some students believed to be konkombas left the school due to pressure from their parents.

According to him, even though the school authority did not give the students permission to leave the campus, they understand their situation because the school cannot guarantee their safety.

“We didn’t permit them to go but they think their life is at risk and we cannot do anything about that since their parents want them home,” he said.

He indicated that the security in the district has been informed about the matter and some police personnel have been stationed at the campus to protect the students.