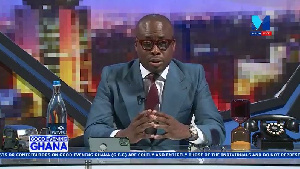 The Minority has said it intends to petition the National Media Commission (NMC) and the Ghana Journalists Association (GJA) to call Mr Paul Adom-Otchere to order for “attacking” Dr Zenator Agyeman-Rawlings, the MP for Klottey-Korle on his show Good Evening Ghana on Thursday evening.

Mr Adom-Otchere told the lawmaker to stop “misbehaving” and making “unsubstantiated” allegations against her political opponents at a time Ghana is battling COVID-19.

The Klottey-Korle MP had alleged that government officials are sharing food to some 400,000 vulnerable people in Accra, Tema, Kumasi and Kasoa – places under lockdown owing to the coronavirus outbreak – on a partisan basis.

Despite the initial denial by the government, Dr Agyeman-Rawlings, in a statement, asked President Akufo-Addo to probe the matter.

In his editorial on his programme on Thursday, 16 April 2020, Mr Adom-Otchere described the allegation by the first daughter of Ghana’s former President Jerry John Rawlings as “wrong” and called on her to behave properly.

Using Dr Agyeman-Rawlings’ own statement against her, the TV host said: “In your statement, you said: ‘My colleague MP in the Ablekuma South Constituency, Dr Oko Vanderpuije, had to also go public about how food intended for the poor was being distributed in NPP vehicles under the direct supervision of the NPP candidate for that constituency. Dr Oko Vanderpuije, before speaking to the press about the unfortunate development, had called Mrs Cynthia Mamle Morrison on phone to bring the matter to her notice and to register his protest.’

“Look at Oko Vanderpuije’s behaviour you are quoting; why didn’t you behave the same way? Are you better than Oko VanderpuiJe, no, no one is better than anyone, you’re all members of parliament. But yes, you come from a great place that all of us wish we could come from. You are carrying the political heritage of Flt. lieutenant Rawlings, you cannot behave the way you’re behaving…”

Mr Adom-Otchere quizzed: “Who told you to issue this statement? Herrr, I don’t even know what to say… withdraw this statement before the lions chew you on social media. How can you tell us how Oko Vanderpuije behaved and you cannot behave that same way; how John Dumelo behaved and you cannot behave the same way…this your statement is completely flawed, never issue such a statement again, you’re a great woman, a fine politician, we want you to stay in politics…”

But on Friday, 17 April 2020, all NDC MPs in lockdown constituencies addressed the media in Parliament expressing solidarity with Dr Agyeman-Rawlings.

The MPs agreed with their colleague that there are several incidents of partisanship in the distribution of food and water in their respective constituencies.