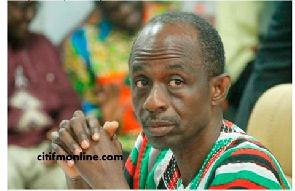 The Chairman of the Audit Service Board, Prof. Edward Dua-Agyemang, has amended his writ against the General Secretary of the opposition National Democratic Congress, Johnson Asiedu Nketia.

The plaintiff, in the amended writ has increased the compensatory damages from GHC15 million to GHC20 million.

The amendment follows an order by an Accra High Court urging the plaintiff to amend his statement of claim to include the exact words alleged to have been spoken by the NDC scribe which are said to be defamatory.

The order was borne out an application filed by the Asiedu Nketia’s lawyers praying the court to dismiss the writ because the statement of claim did not disclose any reasonable cause of action.

The NDC scribe who claims he has evidence and witnesses to support his allegations against the former Auditor General was praying the court to dismiss the suit because it cannot rely on the English translations of the comments he made in the local Twi dialect.

But the court presided over by Justice Sophia R. Bernasko-Essah dismissed the application and directed the plaintiff to amend his case to include the original comments which were made in the Twi language.

Subsequently, the plaintiff has amended the writ to include the exact word spoken in the local Twi dialect which has been certified by the Ghana Institute of Languages.

Gary Nimarko, counsel for the plaintiff has since filed the amended statement of claim and Asiedu Nketia has also `been served on January 30, 2019.

The NDC scribe popularly known as ‘General Mosquito’ has been accused of making slanderous statements against Prof. Dua-Agyeman that he was fond of churning out fake audit reports based on which he was sacked by accountants association.

Prof. Dua-Agyeman in his suit avers that without basis or probable cause Asiedu Nketia “ostensibly sought to impugn the integrity, dignity and reputation of the Plaintiff and to ridicule him in the eyes of right thinking members of society”.

The plaintiff avers that Asiedu Nketia on October 2, 2018 made some unsubstantiated and disparaging statements on an Accra based radio station, Neat FM accusing him of producing fake audit accounts in 1983 while he was at the Audit Service leading to his dismissal.

But the former Auditor General has taken exception to the comments, saying it has generated several comments and media attention in Ghana and abroad ostensibly to tarnish his hard won reputation.

Contrary to the claim by Asiedu Nketia, Prof Dua-Agyeman avers that a letter authored by Prof Kwame Adom-Frimpong, President of Institute of Chartered Accountants, Ghana Council, (ICAG) dated 15th October, 2018 shows that he has been in good standing since 1978 and has never been banned.

Previous Education Ministry denies reports of plan to issue diplomas to JHS graduates
Next Full audio: What Education Minister actually said or didn’t say about award of certificates in Ghana