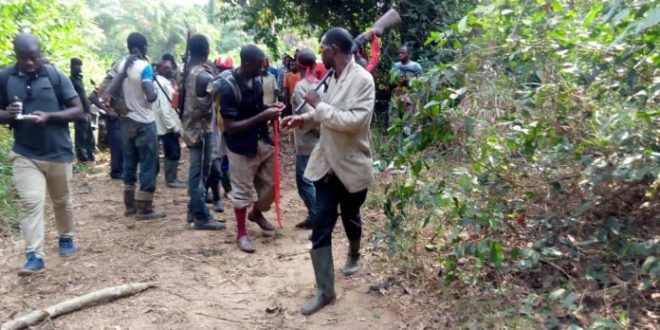 The angry Farmers clad in red armband drawn from communities such as Besibuom, Ahomamu, Adantem,kwaku Botwe ,Asiato and Akukurutu all near Begoro took guns, machetes and sticks to attack Fulani herdsmen and their cattle in the bush to ostensibly flush them out after defying their warnings to leave the area.

The farmers accused the herders of destroying the crops, polluting their river bodies and unleashing terror on their women with threats of rape.

The herdsmen have also been accused of setting fire into the forest reserve, destroying about 210 hectares of trees planted by the Forestry Commission and the Youth in Afforestation under NABCO.

The farmers invaded the bush and forest reserve Friday where the herders have established camps . After an hour of chanting war songs while trekking into the bush, amidst sporadic gunshots, the locals  pursued the herdsmen who were fleeing the area .

Three of the Herdsmen were however arrested by the angry farmers while others managed to escape with their cattle into the deep forest.

Dominic Tetteh, Secretary to the group of Farmers said their action is going to be sustained so far as the Police has reneged on their responsibility despite numerous complaints.

“The farmers we are complaining bitterly that the Fulanis have destroyed all our crops including the tree Forestry commission has given us to plant. Above all, they use fire to burn the whole area. If they find you in the bush and you are a lady, they will chase. The Police are not helping us so this is evidence of our disappointment in the Police. So far us we have guns and cutlasses we shall continue to sack them from this area”.

Previous LIVE UPDATES: Fulham vs Man Utd
Next Feature: Where is Paul Afoko?