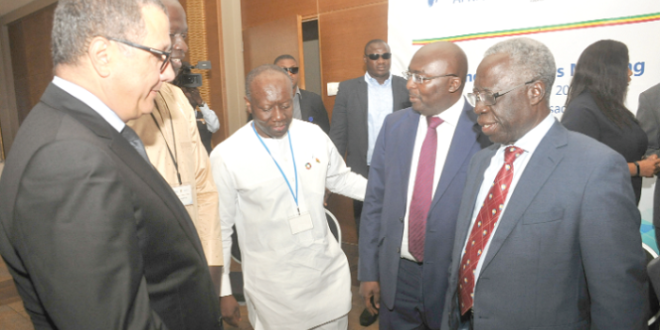 He said as chairman of the Economic Management Team, Dr. Bawumia has exerted himself “professionally” as a team player regardless of his status.

Speaking at a town hall meeting Wednesday, the former finance minister under the Kufuor administration said members of the EMT have benefitted immensely from Dr. Bawumia who is always involved in the activities of the team.

“I want all of us here and on behalf of my colleagues say a very big thank you to the type of leadership the Economic Management Team has enjoyed from Dr. Bawumia,” Mr. Osafo-Maafo stated.

According to him, Dr. Bawumia’s “professional chairmanship to the EMT” is part of the reasons why the economy is on track.

“A chairman who is so involved in the work; he works like a member, a secretary and his sterling quality and professionalism is excellent. So we are where we are because Dr. Bawumia is putting up a very professional chairmanship to the EMT. And I pray that we continue to work together as a team,” Mr. Osafo-Maafo added.

During his presentation, Dr. Bawumia announced government has slashed the cost of importation of products through the ports of the country by 50 percent. The imports of vehicles have also seen a reduction of 30% effective Thursday, April 4, 2019.

The move, according to Dr. Bawumia, is to ensure that higher volumes of products being imported to the sub-region are channeled through instead of its neighbours.

Dr. Bawumia said available data show that traffic at the Lome harbor has increased by some 300% percent between 2013 and 2018 while Ghana saw just a little over 4% increment within the same period.

“To reduce the incidence of smuggling and enhance revenue, the benchmark or delivery values of imports have been reduced by 50 percent except for vehicles which will be reduced by 30% effective 4th April 2019. This means for example, if a container was previously assessed for duty at a value of $20,000, it will now be assessed from tomorrow at a value of $10,000. We expect that the higher volumes of at least 50% annually and increase custom revenues,” he said.