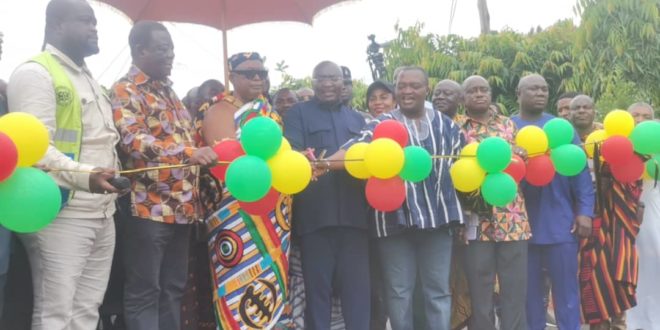 The Vice President of the Republic of Ghana, Dr. Mahamudu Bawumia has dismissed claims that the Akuffo Addo led NPP administration have ignored the needs of the Ashanti Region.

Dr Bawumia believes the New Patriotic Party (NPP) government has done enough for the region which he emphasized deserves recognition.

He said this during the commissioning of the 100 killometres Kumasi Inner City Ring Road and Adjacent Streets Project at Kentinkrono in the Oforikrom Municipality of the Ashanti Region on Monday August 1, 2022.

Addressing the gathering, Dr Bawumia disclosed that, construction of the four-tier Suame Interchange Project will commence in September 2022.

He added that president Akuffo will in September this year commission the Kumasi International Airport, a clear indication that the current NPP administration is delivering the end of his bargain for the Ashanti Region.

Touching on roads, the head of the Economic Management Team, disclosed that a total of 1180 killometres of roads have been completed in the Asantin region by government from 2017 to 2022.

“Government is committed to ensure a cost – effective and sustainable transport system, reduce congestion and travel on roads at ease across the country “He said.

Vice President, Dr. Mahamudu Bawumia in December 2019 cut sod for the commencement of work on the rehabilitation and construction of the Kumasi Inner City Ring Road and Adjacent Streets Project.

Five municipalities as well as four sub-metros,  under the Kumasi Metropolitan Assembly (KMA) being the main beneficiaries of the 100-kilometre roads project at a cost of €55m .

Under the project, roads have been completed in the  in the region included  Suame – 6.0 kilometers,  Tafo  Pankrono–4.5  kilometers, Manhyia – 11.8 kilometers, Bantama – 11. 2 killometres.

Meanwhile the Minister for Roads and Highways, Hon Kwaso Amoako Atta urged Metropolitan, Municipal and District Chief executives in the beneficiary areas to ensure the road is well protected from unscrupulous activities of recalcitrant residents.

He bemoaned instances where some people turn parts of the road into workshop, washing bay, market among others and called on MMDCEs to punish any individual who will engage in such acts on the newly constructed roads.

He described the act as shameful and unpatriotic and warned persons engaging in such acts to desist from it.