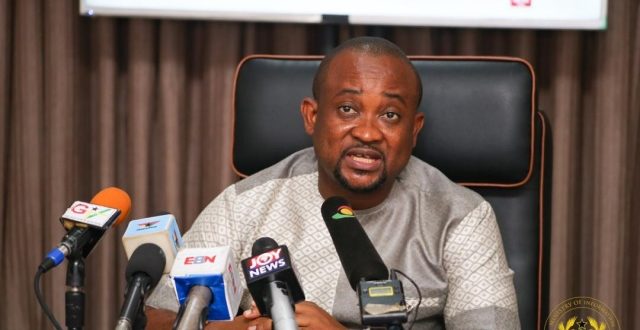 Deputy Information Minister, Pius Enam Hadzide says the leadership of the opposition National Democratic Congress (NDC) is not a superior force in the country and therefore has no right to block investigations by the Police.

He claimed in the worst case scenario, Police can secure an arrest warrant for its party chairman, Samuel Ofosu-Ampofo to launch investigations into his case.

The CID on Wednesday invited the beleaguered NDC national chairman to appear before it for questioning connection with kidnappings and market fires Thursday at 2 pm.

According to the CID, its investigations into recent kidnappings and fire outbreaks in the country fingered the NDC’s national chairman as part of a “grand scheme designed to cause fear and panic in the country.”

But addressing a news conference Thursday at the party’s headquarters in Accra moments after Mr Ofosu Ampofo officially wrote to the CID boss through his lawyers that he is unable to honour her invitation to him, Mahama Iddrisu, Vice Chairman of the NDC Council of Elders said the party supports the national chairman’s snubbing of the CID.

“The position of the NDC which we the elderly members of the party’s council of elders have reluctantly forced to endorse because of the times we are in is very simple. Enough is enough!” he said.

“We have had enough of the vile intimidation and threats,” he continued and “the NDC will not be muffled or unnerved by a police CID director general who has shown by all her actions to be a partisan and on badge supporter named member of the NPP.”

“Our national chairman is under no compulsion or obligation to assist the police in their investigation and the NDC will not allow him to honour such vexatious invitation,” he declared.

Commenting on the position taken by the NDC leadership on the matter, Pius Enam Hadzide said the stance of the opposition NDC is a dangerous precedence and must be condemned.

“The NDC Council of Elders is not bigger than our constitution that gives the Police power to enforce law and order. It’s bad for a political party like the NDC which has governed this country before and still fighting to come to power to behave this way. I can’t fathom this, because all of us are under the laws of Ghana and above the law.

“If the Police has respectfully invited you and you refuse to honour the invitation, they can find other means to come for you,” he told host Kweku Owusu Adjei on Anopa Kasapa on Kasapa 102.5 FM.