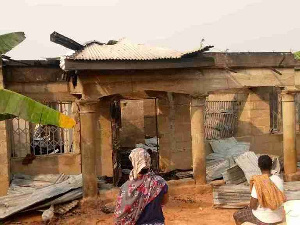 The mysterious death of 39-year-old Gifty Offeh, a mother of seven, whose house was also set on fire immediately after her demise has left some nearby residents calling for the arrest of her husband.

The sad incident that happened on the dawn of Friday, January 28 at Asennua new site in the Kwabre East Municipality of the Ashanti Region has left many of the residents wondering how it all occurred as they suspect a foul play.

According to the angry eyewitnesses and other nearby residents who spoke to GhanaWeb, the late Gifty Offeh, popularly known as lady Gaga, before her demise, had not been on good terms with her husband, Mr. Asare who used to beat her like a boxing opponent.

An eye witness who spoke to GhanaWeb said on Thursday night before her death, the husband who had moved from the place for some time now, came to the woman’s house, engaging her in a scuffle. Shortly after they had been separated, Mrs. Offeh was heard crying and complaining of severe stomach pain, and in the process of her complaints, she was also heard mentioning and accusing the husband of causing her death.

According to the eyewitnesses, Lady Gaga was rushed to the Mamponteng government hospital for treatment, but unfortunately, she passed on around 2:30am on Friday.

The house in which their children had slept, mysteriously caught fire immediately the news broke that she was dead. The eyewitness recounted.

“The husband was nowhere to be found by then,” a resident revealed.

“She was heard mentioning the husband’s name, ‘oh Asare, so are you killing me. Oh Asare, why are you killing me.’ This was during the time she was complaining of severe stomach pain,” an eyewitness said on condition of anonymity. 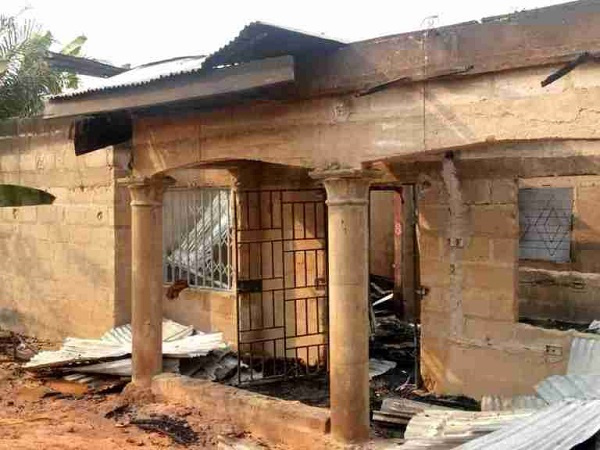 Fortunately for the children, they were all rescued by nearby residents but the whole house was completely burnt.

The residents have however demanded the arrest of Mr. Asare, the deceased’s husband who is currently at large.

“Why shouldn’t we accuse him? Shortly after the confrontations, she was heard complaining of severe stomach pain whilst she was mentioning and accusing Asare, her husband. She died, and returning back to console her children, we found them in a fire also at the verge of death, how?” a resident quizzed in astonishment.

Confirming the incident to GhanaWeb, assembly member for the Asennua electoral area, Hon. Kaakyire Asumadu said the husband is still on the run and has since not been found. According to him, the case has been reported to the Mamponteng district police command and a serious manhunt has been launched for his arrest.

The body of the deceased has since been deposited at the Ankaase hospital morgue for autopsy and preservation.