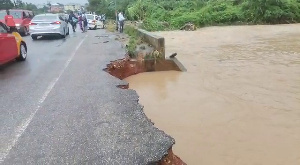 Some parts of the Ashanti region experienced flooding after torrential rains in the early hours of Tuesday, September 28, 2022.

Apiedu, Emena, Kotei, and its surroundings also have their share of the effects of the rains where the roads became flooded.

The downpour which started around 3am, made commuters frustrated with their inability to cross flooded roads, especially where there is a bridge.

Residents living around rivers and big gutters had to be evacuated during the rains.

The torrential rains which lasted for more than three hours also halted vehicular movements, recording huge traffic in those areas.

Some angry residents blamed the city authorities for not adopting development strategic plans in solving flooding-related issues that have been a canker.

They attributed the situation to substandard construction of gutters, and bridges, the negligence of the authorities to their plights, and failure to monitor projects. 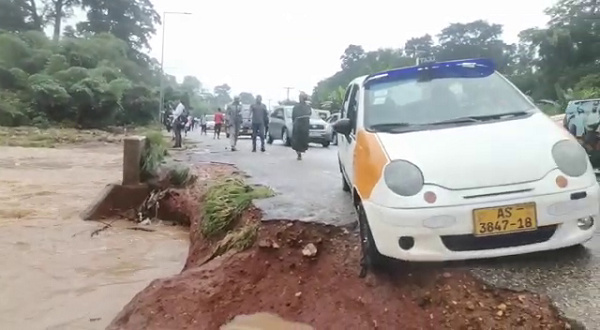 A resident at Asawasi on Otec FM’s morning show ‘Nyansapo’ host Captain Koda that “the bridge constructed over River Peleele is sub-standard, making it impossible to contain heavy rain downpour”.

Some residents at Atafua wondered why the city authorities have refused to construct a new bridge on the road to save lives and properties.

The Ashanti Regional Coordinator for National Disaster Management Organization (NADMO), Frank Kwadwo Duodu, on the morning show warned the public to accept more rains till the end of September.

He also warned residents living in flood-prone areas to relocate to dry lands for their safety during the rains.

The NADMO coordinator also advised them to refrain from building around rivers and desist from throwing refuse into gutters to avoid being choked.

Previous Tamale mob nearly burns alive mum-of-two falsely accused of GH₵10k theft
Next I’m tired of getting arrested, give us jobs or allow us to sell weed – Man to government