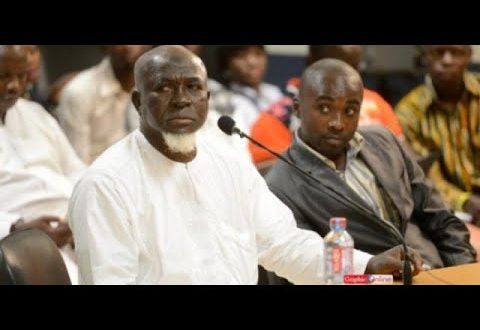 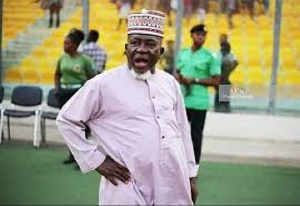 Ghana draw 0-0 with Nigeria in Kumasi

Owner of King Faisal FC, Alhaji Karim Grusah has been trending on various social media platforms after a video of hi

m eating while the officials were addressing the Black Stars players surfaced online.

The veteran football administrator who is a member of the Black Stars Management Committee was present in the dressing room along with other officials after Ghana’s first leg game in the FIFA World Cup playoff at the Baba Yara Sports Stadium in Kumasi on Friday, March 25, 2022.

Alhaji Grusah was captured on camera chewing something while the Ghana Football Association President, Kurt Okraku, and Sports Minister, Mustapha Mohammed were addressing the players for a good job done and reminding them of the return leg in Abuja.

Social media users could hold not off with the laughter especially considering the fact that the King Faisal owner was standing in between the Sports Minister and the GFA President while concentrating on his snacks.

The first leg in Kumasi between Ghana and Nigeria ended goalless and the Black Stars will have to avoid a defeat in Abuja as any scoring draw will see them qualify ahead of the Super Eagles for the 2022 FIFA World Cup in Qatar because of the away goal rule.

GhanaWeb has compiled some of the social media reactions to Alhaji Grusah’s trending video for you in the post below: