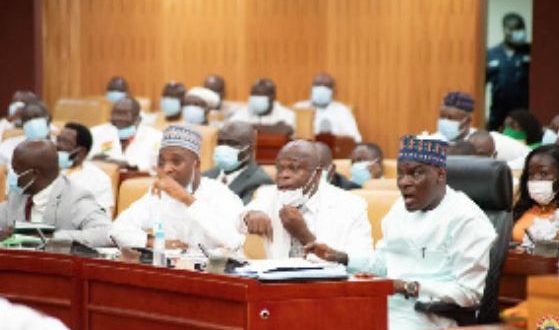 Why minority is fiercely fighting a pay cut of MPs

Share
Members of the minority in Parliament have categorically indicated that they will reject any attempts by government to cut their remuneration by 30% as part of efforts to address current economic challenges confronting the country.

Government announced a 30% salary cut for its appointees as part of these efforts and following that, the Council of State declared its willingness to cut some 20% of the monthly allowances of its members to support government in line with its move.

It is on the back of this that Information Minister, Kojo Oppong Nkrumah suggested that members of Parliament also voluntarily consider a pay cut to support the Executive’s decision.

Pending its presentation before parliament, this suggestion has however been fiercely opposed by many minority members who believe the move will have dire consequences on them.

In this piece, we put together a list of people who have reacted to the information minister’s suggestion and the reasons they gave:

The suggestion is deceptive and unreasonable – Kwame Governs Agbodza:

According to the Ranking Member on the Roads and Transport Committee, Kwame Governs Agbodza, the suggestion is a deceptive means of taking monies from them whilst their colleagues on the majority side remain relatively safe because of their positions as boards members of some state institutions.

He believes it is a move that will only affect the minority members in parliament who are not on any boards of institutions and depend solely on their monthly salaries whereas their colleagues take allowances from board sittings among other things.

Speaking to Joynews, he said majority of NPP MPs “are on boards of state institutions so they draw other remuneration from these boards and other things whereas NDC MPs are not on any boards. So even if they let go of all their salaries, they will be able to find money elsewhere.”

Our salaries are not enough to take us through the month – Peter Kwasi Nortsu-Kotoe:

Akatsi North MP, Peter Kwasi Nortsu-Kotoe agreed with Mr. Agbodza, citing the reason that, their current monthly salaries as MPs are not sufficient because of the number of responsibilities they have.

According to him, aside from fueling and maintaining their vehicles, they also use those same monies to help support projects in their constituencies.

“It will be very difficult for me to support that idea because as a member of Parliament, there are a lot of contingencies on my salary.

“We as members of Parliament fuel our own cars unlike those in the executive, we pay our drivers, we do a number of things on our own, even the periodic maintenance of our vehicles and that’s the money we use to fuel our cars to go to our constituencies and do a lot of things,” he said.

“The common fund is not coming, so we use our salaries to pay for a lot of things in our constituency so if they our cutting our pay, from what source are we going to get all the monies to do all those things? If you are looking at what the MP for Ofoase Ayirebi is saying, he is a minister of state, he doesn’t buy fuel, maintain his vehicle from his salary, there are a lot of things as a minister he gets, no member of Parliament on the NDC sides gets it. We are not members of boards who get allowances so there’s a vast difference between those of us on the minority and those of them who have other benefits and sources of income.

“What we take now, and from which we even fuel our vehicles are not enough to even take us through the month,” he added.

Government cannot take from what salary they have not yet determined:

South Dayi MP Rockson Nelson Dafeamekpor on his part raised questions about how monies can be taken from a salary that has not even been determined by the government yet.

He also believed there are better alternatives like cutting down on expenditure at the presidency to make up for monies needed.

“What I take as salary is actually the salary of the Member of Parliament for the 7th Parliament so what they are giving me is a way of on account until my conditions of service in the 8th Parliament is determined….I do not know how much I am earning, how do I agree to the percentage of reduction?” he quizzed.

“When a government that continues to fly in private jet asks you to reduce your salary, you will not agree,” he told added in a Joynews interview.

Watch the latest episode of The Lowdown below: