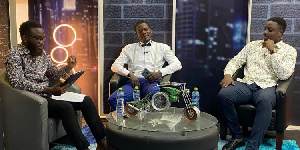 Generally, women are known to be more forgiving in relationships than men even if it has to do with an issue of infidelity and this leaves women in unclear minds about why men find it hard to forgive.

Educational Administrator, Sports Analyst and Master of Ceremony (MC), Eustace Akwei, has finally put minds to rest with an answer to this question.

Speaking on the Men’s Lounge show which is hosted by Nana Yaw Odame on eTV Ghana, Eustace disclosed that men’s inability to forgive easily is more of an ego situation and they feel deflated when they find out that someone else has been in their territory.

“Even in the animal kingdom, when you look at the male species, they are protective of the younger ones and the female ones. It’s just the natural tendency that all men are born with.

“If I’m with a woman right now and thieves should attack us, naturally, she goes behind me. I don’t go behind her hiding because it’s in us as men to be protective, to be dominant and feel like we’re the head”, he added.

He continued, “Biologically, we are not created the same way as women and naturally, our sense of responsibility makes us feel entitled. We feel entitled that whatever concerns you, be it your financial well-being, your health status and everything else our responsibility so when you go out there and cheat, you’ve broken his ego completely”.

Eustace commented that although men usually do not get deeply attached emotionally, it takes a long while for them to get over being cheated on and even in some cases, they never do.