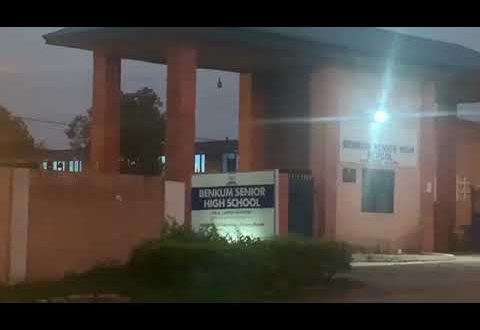 The Benkum Senior High School(SHS) is still in a state of shock due to the leaked sex tape that has swooped the school.

Administration, teaching staff and students have been worried due to uneasiness in the school even as the 2022 West Africa Senior School Certificate Examination (WASSCE) is ongoing.

A whirlwind moves in the school roping suspects and anyone in connection with it.

There are accusations and counter-accusations being the new babies in the hitherto serene educational facility.

A sex video of the sexual escapade between a student and one of the teachers has already leaked and is causing tension in the otherwise calm environment of the school.

The mistrust and show of power have pushed others connected to the scandal talking. The scandal allegedly involved three teachers in the school.

Teaching and learning have been hit hard as teachers are being mocked secretly by students as the bad nuts compared to other professionally stable ones.

Students are troubled to the extend that some candidates have called on the Ghana Education Service to step in as early as possible.

A visit to the school by Adom News‘ reporter, Moses Ohene Amponsah, who has been following the story, revealed that the WASSCE candidates fear the situation will psychologically affect their results while others think the news will make invigilators pre judgemental against them.

Some students, speaking in an interview, also expressed fear that examination officials and markers may mark them down due to the incident.

Some candidates, who have been sacked and barred from school activities including preps before the exams, also narrated how the insensitiveness of school authorities could potentially ruin their future.

One student lamented: “Our friends, families have been calling us to mock us. Others want to know how we are faring, in fact, we are worried, we feel shy to wear anything Benkum School or Uniform.”

Another student vowed: “When I finish school, I shall burn all personal effects linked with Benkum, I won’t allow being linked with the school.”

However, the alleged teachers in the scandal have not been reporting to work.