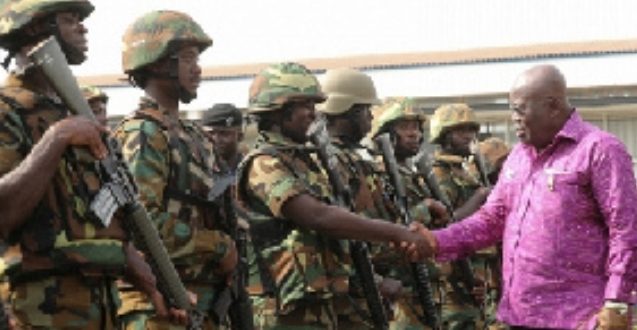 President Nana Addo Dankwa Akufo-Addo has restated his belief that Ghanaians will continue to maintain democracy and to entrench its values in national life.

He stressed that recent voices raising the topic of military intervention were ‘restless spirits,’ whose ‘irresponsible utterances,’ will not scuttle the democratic gains made under the Fourth Republic.

Speaking at the 92nd Speech and Prize-Giving Day of St. Augustine’s College in Cape Coast, on Saturday, 19th March 2021, the President stressed that for these last twenty-nine (29) years of the 4th Republic, Ghanaians have reposed their trust in the democratic process as the avenue to resolve the myriad of problems the country faces.

He added that citizens had further demonstrated their determination to uphold democratic values and institutions to bring development to the nation.

“There are a few, though, whom I have characterised as “restless spirits”, who are not prepared to allow you to complete your education in conditions of calm, peace and stability, and who seek constant turbulence in the governance of the state. This has led, lately, to some irresponsible utterances about coups as panaceas to our problems,” he said.

He continued, “I have said, and will use this platform to repeat that coups have never been, and will never be durable solutions to the political, economic and security challenges confronting our nation and continent.”

With the majority of Ghanaians on the side of Constitutionalism, the President restated that, “(Ghana) will continue to resist the rhetoric and advances of coup mongers and coup plotters, and those of us who have the responsibility to safeguard the integrity of the state will employ all legitimate means in a democracy to preserve our free, open system of governance, which is respectful of human rights, the rule of law and the principles of democratic accountability.”

Coup comments have become topical in recent months. #FixTheCountry activist Oliver Barker-Vormawor was arrested and remanded for five weeks over a threat to stage a coup over the Electronic Transaction Levy (E-Levy) Bill currently before Parliament.

Prof Raymond Atuguba, dean of the University of Ghana’s School of Law, also in a lecture drew a link between economic downturn and coups and warned government to tackle fiscal challenges with urgency because such tensions have often triggered coups.

Previous Ashaiman donation brouhaha: The facts according to Police and Barker-Vormawor
Next What is trending today?