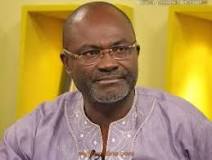 We are not feeling the $1 million, one constituency policy – Kennedy Agyapong laments

New Patriotic Party(NPP) Member of Parliament for Assin Central Kennedy Agyapong has criticised how government policy of $1 million, 1 constituency is being implemented alleging that party members are angry about it and its impact is not being felt.

The NPP had campaigned that when voted into power, it would give each of the 75 constituencies in the country, a million dollars each so that they can undertake their own development initiatives.

But according to Mr Agyapong, NPP party executives in his constituency are unhappy that the money has not been sent to the constituency only for them to hear claims that part of it has been used to build toilets and water projects.

‘1 million, one constituency, I have a problem with it because now when I meet with my constituency executives, they get angry about it. One million, one constituency, they thought the money will come to the constituency so they could be part of how it is used but the money never came, only for them to be told that some toilets and water projects have been done. And I asked: “where is the toilet?” Me, I am the MP of that area, but I am not even aware that toilets have been built. Those toilets, “who are building them and where? “‘He quizzed on Asempa FM.

He stated that claims that money from the policy has been used to build toilets and water projects are surprising because even party folks are unaware of it.

Meanwhile, the Ministry of Special Development Initiatives has been spreading the news of how part of the money from the one million, one constituency policy is being used to build various facilities notably ultra-modern toilets in the various constituency.