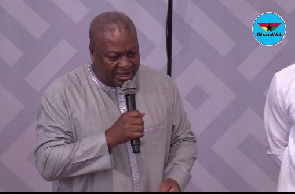 Mr. Mahama polled 213,487 votes representing 95.23 % on Saturday to emerge victor against 6 other contenders in the flagbearership race.

In a post on his Facebook wall, the ‘Boom Man’ congratulated the former president on his election while commending the other six for their conduct during and after the polls.

“My congratulations to former President J. D. Mahama on his election as the presidential candidate of the NDC. My congratulations also go to all the other candidates for the dignified manner they conducted themselves throughout the process and for accepting the results in a mature and good-natured manner”, he wrote.

Mr. Rawlings was however quick to urge the candidate and the entirety of the party to lobby together towards the bigger task of reuniting and restoring the party and its positive image. It is, he maintained, the only way the party can emerged stronger.

“While congratulating ourselves as a party for a relatively smooth process, we have to remember that this is only the first step of the task to convince the larger Ghanaian electorate. I urge the candidate, the party leadership and all the grassroots to work together to re-embrace the NDC’s core principles in a bid to carve a positive message and image for the party”.