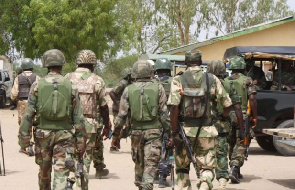 Three members of the Takoradi Amanful Watchdog Committee were arrested and forced to go through excruciating military drills whilst on patrol duty on Thursday dawn.

They were later handed over to the police.

The volunteers were on their regular patrol when they were said to have spotted a guy along the Axim road, close to the Takoradi Airfoce Base with a bag in his hand at dawn around 2:00am on Thursday

They became suspicious and tried questioning him but the guy believed to be a military man bolted. He called in some military men who came to ironically arrest the volunteers and took them to the Airforce base to drill them

The Assembly Member for Amanful West, Charles Kweku Danso, who followed up with two other colleague Assembly Members to the Airforce base, told CONNECT FM the military are accusing the volunteers of possessing unlawful weapons including knives and cudgels, hence their action

The three, Nyameky?, Abeku and Lartey are currently languishing in cells at the Market Circle Police Station in Takoradi.

Meanwhile, some Assembly Members are upset about the turn of event considering the help the volunteers are offering the community to fight increasing crime in the metropolis.

Previous A lady’s nightie stained with blood was found at J.B Danquah’s murder scene – Ken Agyapong
Next Kumasi: Fear and panic of explosion as gas tanker topples at Krofrom