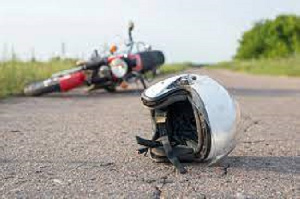 Two persons have been confirmed dead following a head-on collision that occurred between them whilst on motorbikes.

One of the riders, only identified as Moro, died on the spot after his face was totally disfigured following the severe accident.

Kabiru, the other victim, was however confirmed dead when he was rushed to the hospital for treatment.

Junior, an eyewitness, narrating the genesis of the sad incident to GhanaWeb revealed that the two persons on different motorbikes were accompanying a group to the cemetery for the burial of a colleague.

According to him, the two riders aged between 26 to 28 were all residents of the Zongo community at Konongo in the Ashanti region.

In a video available to GhanaWeb, one of the riders could be seen moving at top speed from one side of the road, facing moving vehicles that were said to be carrying the dead body and some mourners. There was another rider on a different motorbike that was coming from the direction of the moving vehicle.

At some point, the motor rider who was moving in an adjacent direction with the moving cars could be seen standing on his motorbike to display skills whilst still at a very top speed.

Unfortunately for the two riders, their motorbikes collided. The crash was very heavy to the extent that parts of the bikes could be seen splashing onto the asphalted road.

A few minutes later, Moro’s face could be seen disfigured whilst in a lifeless state with other people wailing over his demise.

The eyewitness further disclosed that Muniru who did not die on the spot was being rushed to the hospital but was unfortunately pronounced dead upon arrival.

The bodies of the two have since been conveyed to the Konongo hospital morgue.

See the video below: